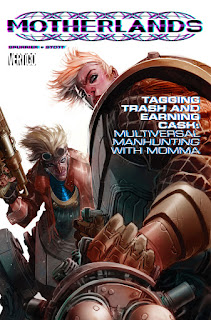 With almost every comic book creator worth their salt jumping to better deals from Image, Boom Studios and other independent publishers, it has been rough sailing for DC Vertigo in recent years. Once home to the very best of mature readers works of fantasy and horror, it now seems to limp by year to year. There's always the occasional new title launched, but few seem to last very long.

Motherlands is the latest attempt: a busy multiverse-jumping bounty hunter story in which a jobbing hunter struggles to make a living in the shadow of her mother - one of the most popular of all time. So of course for her latest and highest profile assignment, she needs help from the one person she does not wish to rely upon.

It's a reasonable enough premise by writer Si Spurrier, but in all honesty and despite some innovations here and there it feels like second-string work for him. Rachael Stott's artwork is strong and appealing - particularly when it comes to a rival bounty hunter named Oona - and it's vividly coloured by Felipe Sobreiro. All in all, it's a good book, but Vertigo doesn't need good books: it desperately needs great books. I don't think Motherlands is going to fit the bill. (3/5)

Dark Nights: Metal really does feel like a power metal album in comic book form. It's loud, garish, bold and infectiously fun. It dives into a pile of superhero characters fighting ridiculously dark and gothic villain versions of themselves. It features Superman and Batman on a cliff-edge facing down a skyscraper high demon Hawkman, and Wonder Woman smacking Black Adam in the face with a magic mace from ancient history. It revels in this stuff. It's stupid, and lacks adequate story detail, but it's all so goofy that you wind up simply not caring. It's big, brash and monumentally silly, because that's the entire point of Dark Nights: Metal. With one issue to go, I'm having a ball. (4/5)

Deliberately timed to follow the most recent regular issue of Detective Comics, this new annual retells the origin of the Batman villain Clayface. It's a timely retelling, partly because of his critical role in the most recent story arc, and partly because it really is worth refreshing and revising these origins every few years or so to keep the characters fresh and relevant to a gradually changing readership. This one is tremendous: it's well characterised and emotionally effective, and it's beautifully illustrated by Eddy Barrows Eber Ferreira and colourist Adriano Lucas. It's also pretty much self-contained, so you can dive in and read this without even worrying about what's happening in the regular book. This is the kind of issue for which annuals exist. (5/5)

The most compelling argument for a Star Wars spin-off movie continues, as archaeologist turned thief Chelli Aphra continues to work unwillingly for the sociopath android Triple-Zero. To make matters worse, she is being pursued by the disgraced Imperial officer Magna Tolvan - and that relationship is about to get a whole lot more complicated. This issue is smart, gut-bustingly funny, and pushes the ongoing story along in inventive and hugely entertaining ways. Doctor Aphra is way better than a spin-off of a spin-off (Gillen's Darth Vader comic) has any right to be. (4/5)
Posted by Grant at 8:35 AM