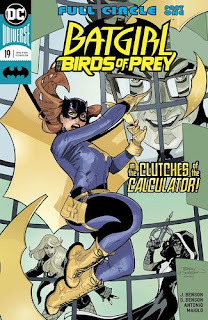 As Oracle, Barbara Gordon has been using the Calculator's own network to stop his criminal enterprises. Now the Calculator is striking back, going to murderous lengths to discover Oracle's true identity - and it's up to the Birds of Prey to stop him before there's a body count.

I figured it was well worth shining a spotlight on Batgirl and the Birds of Prey this time around. It's never the greatest book on the shelves, but it's also at least very good. It has a pair of great writers in Julie and Shawna Benson, and they have a strong sense for what makes their all-female super-powered cast work. There is a continuing story arc - and it seems to be heating up - but what gets me back each and every month is the interplay and warmth between Batgirl, Black Canary and Huntress.

Roge Antonio's artwork is fairly strong, and well coloured by Marcelo Maiolo. The art in this book is generally always good and always tells the story effectively. This is the sort of superhero comic that knows what it's supposed to be and fulfils its remit wonderfully. (4/5)

Batgirl and the Birds of Prey #19. DC Comics. Written by Julie Benson and Shawna Benson. Art by Roge Antonio. Colours by Marcelo Maiolo.

Under the cut: reviews of Port of Earth, The Power of the Dark Crystal, Sleepless, and Star Wars: Darth Vader.

While a television panel debates the ethics of giving aliens free rein to build and operate a quarantined spaceport on Earth, a security team are searching for a rogue extra-terrestrial that has broken the port zone. There is a wonderful sense of menace to Port of Earth, as each issue ratchets up the paranoia that the situation is already much worse than it has already appeared to be. Andrea Mutti's artwork is exceptional, and unobtrusively coloured by Vladimir Popov. It's nice to see Mutti do science fiction after such a great run working with Brian Wood on Rebels. (4/5)

The Power of the Dark Crystal #11

We're down to the penultimate issue of this superb follow-up to Jim Henson's 1982 movie masterpiece The Dark Crystal. You can't half tell: the world is ending, hope is lost, and everything culminates in a situation where no readily apparent victory presents itself. Sure, it puts a lot of pressure on issue #12 to wrap everything up, but on its own merits this is a superb breakneck comic book. Kelly and Nicole Mathews art and colours are fantastic, capturing the tone and feel of the characters without feeling the need to be too detailed. (4/5)

Courtly intrigue begins to threaten Poppy's safety as her guardian Cyrenic fights in the king's tournament. There is wonderfully literary quality to Sleepless, which seems to be running on a slow but measured build of character, narrative and back story. Leila Del Duca's artwork is tremendous, with a distinctive and delicate style that absolutely sells the tone of Sarah Vaughn's script. This is, thus far, a fantastic fantasy book that I really hope finds its audience - I suspect much of it won't be frequenting a local comic book shop. (5/5)

Darth Vader is on the hunt for rogue Jedi when he finds himself being hunted himself. It's a fast, cinematic action scene in comic book form, with a few surprises and a very good interpretation of Darth Vader's personality. After a slightly uneven start this second volume of Vader's exploits is fasting turning into a gleeful pleasure. While it lacks the stronger supporting cast of Kieron Gillen's first volume, it does nail its title character - and that counts for a lot. (4/5)
Posted by Grant at 1:04 PM