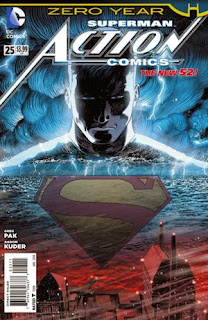 This month a number of DC titles are tying into the Batman "Zero Year" arc, showing what their title characters were doing when the Riddler shut down Gotham's power on the eve of a massive hurricane hitting the Eastern Seaboard. It's an odd choice of crossover, I think mainly because we're only 14 months past all of the zero issues where this sort of thing was already done. It's also odd because, on the basis of this week's issues, they're doing a much better job of it this time around.

This issue sees a young, brash Superman trying to use his powers to stop the hurricane, and learning a valuable lesson in humility in the process. I love the t-shirt-wearing young Superman developed by Grant Morrison and quite frankly I'd read an entire monthly series out of his adventures. Greg Pak has written a sensational script here (he's the new regular writer), and after dropping this book for the past few months I think it's safe to say I'm firmly on board again. (5/5)

Marvel's strangest mini-series (strange because it's basically several miniseries bound together under one title) continues with the third and final unrelated Daredevil storyline, teaming Matt Murdock up with super-heroic private investigator Misty Knight. It's a fast-paced, flirty sort of action story that's a bit like junk food: tasty and high in sugar, but ultimately not as good for you as more intellectually sound comics might be. (3/5)

Another "Zero Year" tie-in, this time showing Lieutenant Jim Gordon fighting corrupt cops in the GCPD while developing an appreciation for the at this point quite mysterious "Batman" at the same time. Like this week's Action Comics this is a great issue, and it makes me think once again that DC would have been much better off rebooting the DCU from the very beginning, rather than starting the New 52 books five years into their respective stories. Jason Fabok's art is, once again, wonderful. (5/5)

Doctor Who: Prisoners of Time #10

Two issues to go: this series, which seemed like a great idea at first, has ground itself into the dirt through a repetitive formula that's gradually become tiresome: the Doctor and a companion arrives somewhere, have a truncated and generally superficial adventure, and in the final pages a mysterious enemy arrives, kidnaps the companion and knocks the Doctor unconscious. This marks the 10th such story in a row, this time naturally featuring David Tennant's 10th Doctor with companion Martha. The art is pretty neat, but the script is fairly perfunctory. (2/5)

I picked this issue up without knowing a thing about it, such is the draw of Riley Rossmo's artwork. He has a wonderful style that combines nice, slightly abstracted pencils with generally vivid, eye-popping colour. I've missed him on Bedlam, but he's starting his own monthly book here. All that in mind, I wished I could like it more than I do. This is a fairly messy and unfocused first issue of magicians and the supernatural in rural USA, and while it could develop into something worthwhile, for now it feels a little undercooked. One to keep an eye on, and to perhaps give the benefit of the doubt for the next few issues. (3/5)

If there's a single image I loved the most among this week's comics, it was the sight of Bizarro breezily offering a flower to Lex Luthor. The relationship that's formed in just two issues between this hulking, flawed Superman clone and his cynical super-genius creator is simply wonderful - and I hope DC is smart to keep it going beyond this one miniseries. This is shaping up as one of Geoff Johns' better superhero events: with the world's superheroes either missing or in disarray, who's going to fight back against the Injustice Gang who now rule the planet? The answer is, of course, other villains, and this is the issue that finally assembles Luthor's super-team who will be tasked with taking down Ultraman and his comrades to save the Earth. It's big, widescreen stuff with great dialogue and superb art by David Finch and Richard Friend. (5/5)

Whatever Gail Simone and Freddie E. Williams II are doing with The Movement, I'm just not getting into it any more. There's a considerable lack of momentum, or at least a lack where I feel there should be momentum. Each issue it's becoming more difficult to remember exactly what's going on as the book slowly lurches along, implying a purpose without actually having one. It's been six issues, and yet by-and-large I don't feel connected to the characters. There was an intriguing idea here, but the execution simply hasn't worked for me. (2/5)

Somewhere in the bowels of DC Comics there's a bet going on: how long can Stormwatch continue to be published without a half-decent issue to speak of? How many months in a row can Jim Starlin write this kind of twaddle, rich with all the elements that made 1990s comics so absolutely dreadful? For how long will DC make Yvel Guichet draw this rubbish when he could be drawing something more interesting? This storyline seems to be titled "The Fall of Stormwatch". We can but hope. (1/5)

Things heat up in this issue with characters swapping time periods, the military sweeping in and the stakes getting raised an impressive amount. Lemire does some great inventive work with characters not understanding each other's languages, and the plot pushes along in a satisfying manner. We're at the halfway point and one of the best commendations I can give for this book is that I have absolutely no idea what is going to happen. Check it out, particularly if you're a fan of smart science fiction comics. (4/5)

After last issue's shocking developments, David now finds himself the prisoner of SWORD - and Agent Brand has not forgiven him for their last encounter. This issue is a perfectly entertaining X-Men comic, and it's been testament to Spurrier's writing that 19 issues in this series hasn't had a single mediocre issue. They're all entertaining or better, and I assume the only reason it isn't finding a better audience is that it lacks a really famous or popular mutant in the lead cast. This is a pity, because I love David's adventures and really want to see them continue. (3/5)
Posted by Grant at 9:17 AM