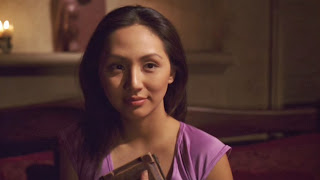 T'Pol works out that there is another alien sphere nearby, contributing to further spacial distortions in the expanse. While the Enterprise amends its course to investigate the new sphere, Hoshi begins to receive psychic messages from a mysterious intelligence on a nearby planet. The alien claims that he can help the Enterprise find the Xindi - but the information will come at a price.

Maury Sterling plays Tarquin, the psychic alien who has - due to his powers - been exiled alone on a stormy planet for the rest of his life. From time to time he attracts passing travellers and convinces them to live with him and provide companionship. I did appreciate that the script didn't take an easy route and make Tarquin an evil character: he is certainly selfish, deceptive and unethical, but pains are taken to ensure he remains a broadly sympathetic character. It's also nice to see Linda Park get an episode largely to herself. She last got the spotlight in Season 2's "Vanishing Point", and that was both a long time ago and pretty dreadful.

The episode's secondary storyline concerns a second alien sphere. The first was uncovered in "The Xindi", and it's great to see it picked up here. The 'big mysterious artifact' is a great trope of science fiction (think Rendezvous with Rama) and I love that Star Trek is playing with the concept. I was a little disappointed that more wasn't made of the second sphere once discovered, but the episode certainly concludes on a jaw-dropping revelation that has me invested in the season's story arc for the first time.

Overall this is an unambitious but enjoyable episode, and that's good enough for me. We're now six episodes in, with three episodes ranked as 'good' or better. Things are finally starting to look up.
Posted by Grant at 9:26 AM