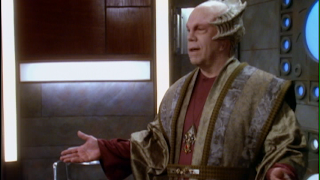 Ivanova is dispatched on the White Star to make contact with one of the galaxy's oldest and most powerful species, in order to get their assistance before the Shadow War begins. The Earthforce government dispatches a new political officer to advise an unwilling Captain Sheridan. Security officer Zack Allen faces a crisis of loyalty when he's caught between his superior officers and the demands of the Night Watch.

I really don't know what to make of "Voices of Authority". Bits of the episode work very well. Other bits work very badly. It certainly has some cringe-inducing attempts at comedy that are well out of date - even for a series that's 20 years old. In the end it feels like an episode that I simply found annoying, but which I somehow wanted to enjoy.

Part of my issue is Draal, the Minbari who now lives on Epsilon III below the station and who controls the massive planetary machine that's hidden there. I positively hate the character. He's irritating, written in a trite manner and performed by John Schuck in a gregarious, over-the-top fashion. His lines are peppered with comedic bits, none of which work for me. He is like fingernails on a blackboard. That he's teamed up with Ivanova, not one of my favourite characters, just makes his scenes even more difficult to sit through. Ivanova subsequently takes off with Marcus the Ranger (another character I'm finding quite badly written and performed) on a mission to speak with one of the First Ones - races of aliens vastly more powerful and ancient than humans.
Back on the station Sheridan locks horns with a government-appointed political officer, played by Shari Shatluck like she's stepped out of a 1940s screwball comedy. This is a plot that feels like it should work, with the Nightwatch and the Ministry of Peace slowly and insidiously working their way into the station's operations. Unfortunately Straczynski writes the Night Watch like a high school student with a copy of Nineteen Eighty Four, and any possibility of subtlety or nuance is out of the window. It's difficult to believe that the sort of paranoia and mistrust typified by McCarthyist America (what he appears to be aimed for) could possibly develop with the instigators loudly laughing like a pantomime villain at every opportunity. Shatluck is also saddled with a painful scene where her character strips naked and tries to seduce Sheridan - it's dreadful, sexist and feels grossly out of date.

If there's a silver lining, it's the plot thread running through the episode in which G'Kar tries to find out more about the Rangers and the Conspiracy of Light. His final scene, in which he throws Garibaldi a copy of the Book of G'Quan, is exactly the sort of tight, dramatic scripting and direction I wanted to see in the rest of the episode.

The episode wraps up with a big plot development: somehow (it's never actually explained) Draal's machine recorded a secret communication on the other side of the galaxy between then Vice-President Clark and the villainous Mr Morden plotting the assassination of President Santiago. It feels a bit cheap to have such a plot-critical piece of information get dropped into the cast's laps without explanation. It's lazy.

Five episodes in, and Season 3 is running at 40%. I'm genuinely surprised. From my initial viewing two decades ago I remembered Season 3 being the one season I really liked. I guess either tastes change, or there's a big upswing in quality coming down the line. Fingers crossed it's the latter.
Posted by Grant at 9:22 AM