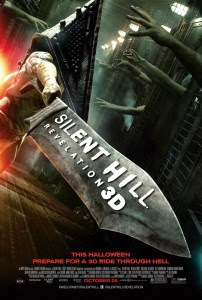 Silent Hill was an inventive and engaging horror videogame released for the Sony PlayStation in 1999. It was a commercial hit, and led to eight sequels (to date). It also led to Silent Hill, a 2006 feature film helmed by French director Cristophe Gans (Brotherhood of the Wolf). The film did a fantastic job of replicating the game's iconic creepy visuals, but struggled somewhat in terms of its screenplay. It worked, but only partially, and wound up suggesting a great movie rather than actually being one.

Silent Hill the film was not a massive hit in cinemas, so it was quite surprising to see a sequel turn up last year: Silent Hill: Revelations. It included some of the cast of the first film, including Sean Bean, but had a new writer/director named Michael J. Bassett. I quite liked some of Bassett's earlier work, including the low-budget horror Deathwatch (2002) and his underrated Robert E. Howard adaptation Solomon Kane (2009). He seemed a reasonable fit for the material, and I found myself quite eager to check the film out whenever I got the chance.

Oh goodness me I shouldn't have bothered. If Silent Hill suggested a great film without actually being one, Silent Hill: Revelation suggests a mediocre film without even managing that far. It is the sort of film that you don't simply dislike - you find yourself lying awake at night trying to work out what everyone involved in the film was possibly thinking. In future, when people start complaining about the latest Hollywood genre film being 'the worst film ever', it will be easy for me to point to Silent Hill: Revelation as something easily much, much worse.

The film picks up almost a decade after the original, with Heather Mason (now played by Adelaide Clemens) on the run across the USA with her father Harry (Sean Bean), all the while haunted by nightmares about the town Silent Hill. When some cultists kidnap her father Heather has no option but to travel to the town, new classmate Vincent (also a cultist, and played by Game of Thrones' Kit Harington) in tow, in an attempt to rescue him.

The actors are almost entirely unconvincing, with some of them - notably Malcolm McDowell - actively chewing the scenery, I assume in an attempt to somehow find an escape route. This creates a significant problem: if all of the actors are playing out the film as if it's a gregarious and embarrassing pantomime, it's pretty much impossible for the audience to find the proceedings remotely scary. If you're a horror film and you're not even remotely creepy, then you've pretty much failed the most basic requirement for being a functional horror movie. Over-the-top performances worked by Michael J. Bassett in Solomon Kane because he was dealing with over-the-top characters. Silent Hill is a franchise of insidious dread and careful subtlety: between the acting, the direction and the incredibly jarring 3D (I watched the film in 2D, but it isn't hard to see the bits where unconvincing computer-generated objects are flying towards the viewer), Revelations doesn't have a hope.

This film earned $50 million dollars from an estimated $20 million dollar budget. That suggest the terrifying possibility that there might be a third Silent Hill down the line. I can only hope that if the producers try, that they find a better script and director than this - and to pray that audiences are forgiving enough to give them another chance.
Posted by Grant at 7:57 AM