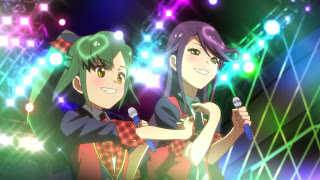 It's been quite a while since my last review of this anime, so let's briefly recap: AKB0048 is a Japanese animated series based on the hugely popular and massive commercial pop outfit AKB48. I watched the first episode anticipated (indeed somewhat desiring) an enormous train wreck, and instead discovering a ridiculously silly and charming science fiction drama about pop music, interplanetary rebellions, alien creatures, ancient prophecies, lightsabers, robot suits and dance. Episode #4, "Your Efforts Aren't in Vain", settles down a lot from the crazier first three episodes, but it's still unexpectedly enjoyable stuff.

Now that they have arrived on the planet Akibastar, the new AKB0048 recruits settle into their new accommodation and begin training as singers and dancers. For young Sonata it's a chance to reunite with her older sister Kanata, although her joy at seeing her is not reciprocated.

This episode is actually a very welcome change from the more frantic elements of the first three weeks: it's very much a character piece. Kanata and her classmate Mimori are the only continuing members of AKB0048's 75th round of singers, and despite their best efforts have never succeeded in moving beyond the trainee stage. As a result there's a huge bone of contention between Sonata - who is technically too young to join, and who idolises her sister - and Kanata - who, despite Sonata's affections is embarrassed at her own shortcomings and resents having them made apparent. To be honest it feels a bit like a soap opera, albeit a very amiable soap opera with beautiful animation and a great use of colour.

Oh the colour. It's worth noting how rich and vivid AKB0048 is. The images pop off the screen in eye-catching combinations and really give a sense of energy to the series. Take a look at the screenshot above: it isn't merely bright, it actively glows off the screen. I also really like the judicious use of CGI in certain musical numbers.

I'm keen to see how this series develops from here. This episode was slower, and featured more depth of character than the others, so will the series continue in this slower vein or will it pick up again and get a little crazy in the future? After four episodes this series is still scoring 100% for me, which is an impressive as it is unexpected.
Posted by Grant at 9:33 AM