Doctor Who: "The Firemaker" 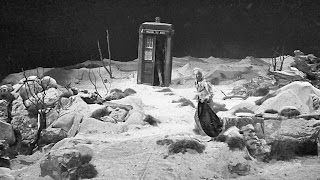 Things reach their violent conclusion in "The Firemaker" as the Doctor and his companions are returned to the Cave of Skulls to make fire, and Kal and Za have their final showdown for the leadership of the tribe.

To be honest it's all a little underwhelming. There's something very off about the pacing of this episode, and it's interfering with the dramatic tension. I think part of the problem is the tribe: for the first three episodes of the series the focus has entirely been on the experience of the four TARDIS travellers. Now that we're getting a resolution to Kal and Za's power games, it becomes suddenly apparent that Kal, Za and Hur are the only actual characters in the tribe; we did also have Old Mother, but she died last week. The rest of the tribe are extras, and to be honest they act like it: a lot of them look quite bored. Kal and Za have a well choreographed final battle (including the second on-screen death, if we're keeping count), but it's in the Cave of Skulls and the only witnesses are the Doctor and his companions - and bizarrely they just stand there and watch when it would have been a lot more sensible to just leg it and get back to the TARDIS.

There is some good in this episode. We see the Doctor and Ian settle their differences - at least temporarily - and work together to push Kal and Za's conflict over the edge. The cast are still treating this serial like a life-and-death event, rather than a thrilling adventure. They're appropriately horrified when they witness the end of Kal and Za's fight. I won't say who wins, but will reveal it involves someone's head and a massive rock being smashed onto it. Obviously we don't see the rock connect, but the reactions of the Doctor and his companions actually makes the scene horrific enough. This has been a genuinely brutal story. Fans often point to "The Seeds of Doom" or "Vengeance on Varos" as stories where Doctor Who gets a bit grisly for its own good, but it's clear now these serials have precendents. The series starts with appalling violence, and actually softens the tone from there.

The episode ends with the Doctor and his companions arriving in a new location: some kind of jungle. Susan checks the radiation meter and it reads as safe, but as she walks away it quietly rises into the danger zone. Next episode: "The Dead Planet".

Overall I think "An Unearthly Child" is underrated and quite distinctive. I have to be honest, however, this final episode feels a little bit messy and unfocused. I'm giving it the thumbs-down, leaving Series 1 with three good episodes out of four, or 75%.
Posted by Grant at 9:26 AM