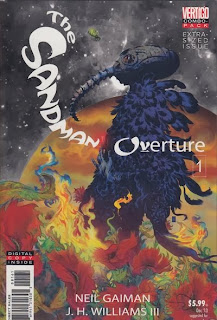 American comic books work to a four-week schedule. This means that any month that has five Wednesdays will inevitably wind up without the usual pile of regular superhero comics flooding the shelves. The highest-profile release this was almost certainly Neil Gaiman and J.H. Williams III's The Sandman Overture, the first of six issues telling the back story that leads up to The Sandman's debut issue way back in January 1989.

I didn't wind up buying The Sandman Overture: a combination of a higher cover price (US$4.99) and an unconvincing quick flick through scared me away. It certainly looks gorgeous, but it also looks uncharacteristically wordy - as if Gaiman has forgotten how to writer comic books and instead delivered a sort of illustrated novel with occasional bits of dialogue. I also dislike prequels on principle. I read The Sandman's original storyline, and never once felt a burning need to know what happened to its titular immortal to place him the unfortunate position in which we first meet him. Some stories are better left unknown: a fact Star Wars fans learned to their despair in 1999.

Even with the reduced number of books, there were still quite a few things I found to purchase. Under the cut: reviews of Saga, Teenage Mutant Ninja Turtles, Thor: Crown of Fools, True Lives of the Fabulous Killjoys, Wild Blue Yonder and X-Men: Battle of the Atom. Apologies for the delay in posting this edition of the Pull List: a statewide delay saw all of Melbourne's comics arrive two days later than expected.

The art feels uncharacteristically scrappy near the start of this issue, as if Staples was straining against a deadline to get this issue done. It was an oddly lacklustre effort, and not the high standard that I've come to expect from this book. As for the rest of the issue, it felt competent and entertaining without feeling exceptional. This third arc of the book is dragging for me, and I'm not entirely sure why. It feels as if the momentum has boiled away, and now I'm waiting for something to happen. (3/5)

After an altercation with the Foot Clan, Raphael is struck by a poisoned dart - and if he's to ever be a ninja again his brothers are going to have to head to Little Japan in a search for an obscure fruit. This comic is just breezy all-ages fun. It adapts the current animated series perfectly, and actually works as a better superhero comic that most of the superhero comics produced each month by DC and Marvel. (3/5)

This is a pretty disposable one-shot. The first half is an all-new story that, based on the character designs, is based not on the comic-book Thor but rather on his motion picture adaptation. In it, Thor, Sif and the Warriors Three head off on a short adventure. The script is perfunctory and the art is fairly ordinary. The second half reprints the classic storyline "Whatever Happened to Balder the Brave?", which features the original appearance of Thor: The Dark World villain Malekith the Accursed. If you don't already have it, this second half is well worth purchasing - but overall this feels like a very ordinary comic. (2/5)

True Lives of the Fabulous Killjoys #5

Things are reaching a climax here, with some action, character deaths, mayhem and general chaos. Once again the real star of this book has been Becky Cloonan, whose clean, exaggerated style is a perfect match for the slightly-hipstery science fiction story that Way and Simon are telling. With one issue left, this has been a slightly patchy but ultimately rather enjoyable sci-fi adventure comic. I'd be interested to see Way and Simon return to this world in future comics, to flesh out the intriguing world they've developed. (3/5)

This is a great comic miniseries: strong characters, great action, a nice apocalyptic setting and a strong sense of flight: that sense you get from Hayao Miyazaki's animated films, where it seems like such a thrilling and natural thing to do. This book is flying pretty far under the radar (see what I did there?) at the moment, and deserves a much larger audience than it's getting. This is the best comic book I read this week, and I can't wait to read issue #4. (5/5)

So there's a big fight, and some characters die (not ones you care about) while others change sides. One epilogue in particular struck me as particularly strange, basically warping a character out of recognition in order to accommodate a new direction for the regular monthlies. I get that Marvel like to constantly shift the chairs around on their big franchises, but I think those shifts need to be based in character, rather than changing characters to accommodate the shifts. There's not as much of a direct and cynical lead-in here to new miniseries, as was the case with Age of Ultron, but it's still very open-ended for what should have been a barnstorming finale. (2/5)