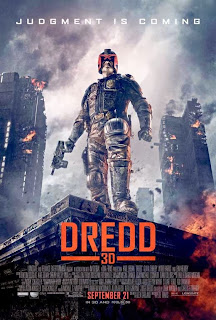 In Gareth Huw Evans' 2011 action film The Raid, a rookie SWAT officer joins a police team on a dawn raid on a decrepit Jakarta apartment block. The entire block is controlled by a drug kingpin and filled with his mercenaries, dealers and criminal associates. A few stories up and the SWAT team is rumbled, leading to an action-packed journey to the top of the building, to eliminate the crime boss and get out alive.

Now in Pete Travis' 2012 science fiction film Dredd, a rookie "Judge" (basically a police officer who also sentences criminals at their point of arrest) joins the legendary Judge Dredd in investigating a triple homicide in a decrepit Megacity One apartment block. The entire block is controlled by a drug kingpin and filled with her mercenaries, dealers and criminal associates. A few stories up and the Judges are rumbled, leading to an action-packed journey to the top of the building, to eliminate the crime boss and get out alive.

Pete Travis and DNA films must have been horrified when they saw or heard about The Raid. Both films were developed independently, each without knowledge of the other, and shot at opposite ends of the planet (The Raid in Indonesia, Dredd in South Africa). Of course Dredd had the higher budget, and some pretty extensive visual effects work required, so The Raid managed to sneak in, get all the attention and critical acclaim, and leave Dredd looking like a slightly less edgy, slightly less interesting version of the same story.
This isn't to say Dredd isn't any good. For one thing it goes without saying that it's head-and-shoulders above Danny Cannon's bloated Judge Dredd (1995), and that Karl Urban's Eastwood-inspired, tightly wound performance in the title role is significantly more effective than Sylvester Stallone's self-parodic version. Particularly impressive is Olivia Thirlby as psychic Judge Cassandra Anderson, who looks as if she's walked off the page and onto the screen.

This film presents a more realistic and grounded take on the Judge Dredd mythos, and as a result it loses a bit of the satirical edge that has marked the comic as so distinctive over the past three decades. I think the shift gives the production more value than it loses: it may not be as crazy and over-the-top as the comic (or, indeed, Danny Cannon's film) but it gains a certain amount of weight and dramatic tension in return. There's always been a bit of a problem with presenting Judge Dredd on screen, because in the comics he's a fascist satire aimed at Margaret Thatcher's Britain - which could wind up making him look distinctly unappealing when translated to live-action. By softening the edge of the original texts, Travis and screenwriter Alex Garland (28 Days Later) have made the character work remarkably well.

It's a great shame that Dredd and The Raid simultaneously developed the same plots, because coming second has taken the wind out of Dredd's sails to a certain extent. It's a shame, because it does enough things differently for both films to co-exist quite happily. This is a sharp, violent science fiction action flick that ticks all of the right boxes and proves that - a bit of tweaking and softening later - Judge Joseph Dredd works on the big screen after all.
Posted by Grant at 9:10 AM