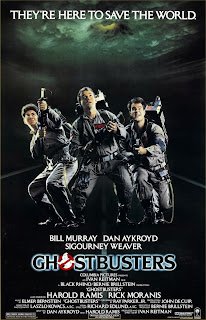 For a while now I've been toying with the idea of the "perfect" film. There are films that I like, but which I will also openly admit are not actually very good on a semi-objective level. There are other films that I really like, but which are critically flawed and suffer problems that the better aspects manage to overcome. Then I've been thinking about the "perfect" films: they are structurally and technically flawless, and run across the screen like a well-oiled machine. An example of the first kind of film might be, say, Masters of the Universe, which I've loved since childhood but which is a messy live-action adaptation of a toy-based cartoon. An example of the second kind of film might be Alien 3, which is a glorious and mournful masterpiece almost crippled by studio interference. A good example of the third kind, the "perfect" kind, is Ghostbusters.

This comedy horror film, released in 1984 to great commercial success, simply doesn't put a foot wrong. The funny bits are funny. Every character is distinctive and entertaining. The horror elements provide a good number of high-quality scares. Most importantly the narrative is whip-smart and cleanly structured. There may be better films in existence, but I have no problem describing Ghostbusters as perfect: perfect in construction, and perfect in execution.
The film was developed by comedy performers Dan Ackroyd and John Belushi as a follow-up to their cult hit The Blues Brothers. Following Belushi's premature death, the project evolved into the production that we're all familiar with today. It remains something of a sketch comedy spin-off, since it features not only Saturday Night Live alumni Ackroyd and Bill Murray but also SCTV veterans Harold Ramis and Rick Moranis. It's impressive that, given the fairly heavy emphasis on sketch comedy performers among the cast, the film sustains such a tightly constructed and well-considered narrative. The first half is certainly stronger than the second, but even at its weakest moments Ghostbusters is one of the best studio features of its decade.

A key part of the film's success is how it balances elements of comedy and horror. The humour comes naturally through character and dialogue, and is used throughout the film to flesh out the characters - and it's a great, memorable set of characters. Whether Bill Murray's Venkman, Dan Ackroyd's Ray, Harold Ramis' Egon or Sigourney Weaver's Dana, they are uniformly great and work together in an outstanding fashion.

It's actually quite easy to forget, among all of the one-liners and comedic performances, that at its heart Ghostbusters tells a horror story of an ancient god returning to destroy the world. Some of the elements - notably the transformation of humans into demonic dog-like monsters - are incredible effective and rather scary (scary, that is, within the confines of a family-friendly movie). Despite being almost 30 years old the film's visual effects hold up remarkably well: they were produced with integrity, and that sort of attention to detail and enthusiasm goes a long way.

Ghostbusters was followed by a sequel five years later, one that partially failed to recapture the magic formula of the original. Attempts to make a third film have floundered for years; while I feel for Dan Ackroyd, who clearly wants the third film to go ahead, part of me feels it's maybe not too bad a thing that it doesn't happen. Any more sequels would only move to further tarnish the brilliance of the original film.
Posted by Grant at 8:58 AM