Doctor Who: "An Unearthly Child" 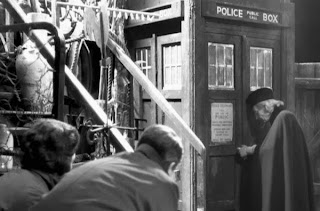 I spend about half my time on this blog reviewing individual episodes of science fiction TV, and this week it's the 50th anniversary of Doctor Who, so I figured it might be appropriate to review the very first Doctor Who serial ever made. Internal BBC documents from 1963 suggest the serial was titled "100,000 BC", but pretty much everybody refers to it by the title of its first episode: "An Unearthly Child".

In an inner city London school, two teachers - science teacher Ian Chesterton and history teacher Barbara Wright - are concerned about one of their pupils, the mysterious Susan Foreman. She appears to be a mathematical genius, but then struggles with the simplest of problems. Her understanding of history appears to be skewed and bizarre. When they follow her home, they stumble into what seems to be an ordinary police box. Inside it turns out to be a massive alien time-space vehicle, owned and operated by Susan's equally mysterious grandfather: the Doctor.

The problem with reviewing "An Unearthly Child" is that it's the unassuming first episode of a low-budget family serial, yet it now carries with it a 50-year tail of science fiction adventures, Time Lords, Daleks, Cybermen and all other popular aspects that - while now considered part of our popular culture - didn't even exist when this episode went to air. For the purposes of reviewing these episodes I want to look at what's different between them and what we think of as Doctor Who today.

I suppose the critical difference from the outset is that in 1963 Doctor Who is not a series about the Doctor. He's a pivotal supporting character, but the focus really is on Ian and Barbara. Their investigation of Susan is what pushes the story along, and it is through their eyes that we first meet Susan and the Doctor, and first enter the TARDIS. They're great characters as well, and beautifully performed by William Russell and Jacqueline Hill. They're both intelligent, sensible and caring people. There's a warmth and familiarity to them from their very first scene.

William Hartnell's Doctor is a far cry from what we expect from the character today. He's rude, dismissive, callous and at times rather cruel. He resents the arrival of Ian and Barbara. At one point he threatens to leave Susan in 1963 and depart without her. He is deliberately difficult for the viewer to identify with, leaving us with the same questions Ian and Barbara are asking themselves: who is this man? Where is he from? Is he even human?

The greatest masterstroke of the episode is the TARDIS (Time and Relative Dimension in Space), an alien space-time vessel that's bigger on the inside and dominated by a white hexagonal control console. I still think it's the most inventive spaceship in the history of science fiction television. It's a massive set as well - subsequent versions of the console room will get smaller and smaller, but in 1963 it's huge.

This is a fantastic first episode. It establishes the characters and the basic premise, and concludes with an ominous cliffhanger: the TARDIS has materialised on a desolate wasteland, and the shadow of a watching figure falls over the landscape. Top marks, thumbs up: Doctor Who's first season gets to kick off at 100%.
Posted by Grant at 9:46 AM