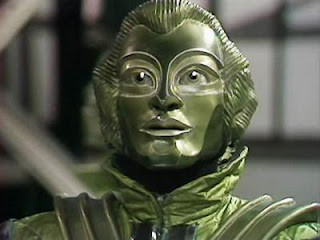 Who50 counts down to the 50th anniversary of Doctor Who by reviewing my favourite episodes and serials over the history of the programme, counting down from #50 to #1. Today, #22: "The Robots of Death", a 1977 four-part serial written by Chris Boucher and directed by Michael E. Briant.

The Doctor and Leela arrive on an isolated sand miner, with a minimal human command crew and a vast array of servant robots. When the human crew are murdered one by one, the Doctor rapidly moves from chief suspect to the Sandminer's only hope of escaping "the robots of death".

If "The Ark in Space" was the beginning of Tom Baker's tenure as the Doctor, "The Robots of Death" comes towards the end of that tenure's height. Sure, there were many great serial produced after 1977, but for all intents and purposes this is Doctor Who at its very best. In fact while there may be better individual stories to be found in other seasons, for pure consistency of quality Season 14 (1976-77) is very likely the best that Doctor Who has ever been.

This serial blends two very well-established tropes. The first is the Agatha Christie style murder mystery. It's rapidly clear that one of the humans on the Sandminer is controlling the murderous robots, and the Doctor (and the audience) must engage in a process of elimination to identify the guilty party. It's amazing that it took Doctor Who 14 seasons to produce an Agatha Christie pastiche, and almost just as surprising that the series has only really returned to the well twice since ("Terror of the Vervoids" and "The Unicorn and the Wasp"). The second trope is the "base under siege" storyline, something that been a staple of Doctor Who since "The Tenth Planet": a small group of isolated humans struggling to survive from an invasion of horrible monsters. By January 1977 this storyline has essentially become Doctor Who's bread and butter, getting rolled out in ten separate serials and on a near-annual basis.

And in the case of "The Robots of Death" the monsters are wonderful. There is an art deco design scheme that dictates every costume, prop and robot in the entire production. It helps create a world (we never discover the name of the planet) that is clearly decadent and artistic, where even mechanical workers are constructed with a strong sense of aesthetic.

This is also the second serial to feature Leela (Louise Jameson), the Doctor's primitive, knife-wielding companion. In her original serial, "The Face of Evil", it was possibly difficult to see how she would function as a regular travelling companion - particularly coming as she did on the heels of the widely adored Sarah-Jane Smith (Elizabeth Sladen). Here she excels: she is smart without being educated, wise without being sophisticated. She is a remarkable contrast to previous companions: when faced with the monster, she would rather fight than run. It gives her a fresh energy, and despite Tom Baker's deep misgivings at the time she works brilliantly with the fourth Doctor.

The bottom line is that this is a tightly written and designed traditional Doctor Who adventure. It does everything that Doctor Who does best, and it does it memorably. When writing about "The Green Death" I noted the enormous impact that the giant maggots had on their audience. I think "The Robots of Death" made a similar impact, with the image of the calm, murderous art deco robot, politely explaining it's about to kill you, burning into the memory of an entire generation of children.

For more Who50 reviews, check out the complete list here.
Posted by Grant at 7:37 AM