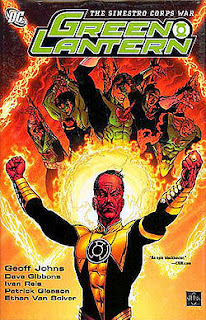 A spot of dissatisfaction (see below) with a miniseries has me wondering what it is that makes a good one. When it comes to superhero comics: what elements divide the good from the bad? If they're an "event" miniseries, what should they include or exclude to make them as entertaining as possible?

I'm in love with the idea of the event miniseries, but in practice they don't seem to work too often. Secret Invasion was terrible. Siege was terrible. Infinite Crisis wasn't too hot, nor were Zero Hour or Blackest Night.

I did really enjoy Final Crisis, although that was a pretty impenetrable comic for many people. I think the best event series in recent years is still The Sinestro Corps War, which managed to feel genuinely epic while still finding time for a proper, satisfying conclusion and limiting itself to a few select titles.

Marvel have several miniseries about to kick off, and DC has Trinity War in August. At the moment I'm feeling a bit burned and might stay away and catch up with them in trade.

Under the cut: reviews of Age of Ultron, Batman and Batgirl, Batwoman, It Girl and the Atomics, Legion of Super-Heroes, Revival, Ultimate Comics Spider-Man, Wild Blue Yonder, Wonder Woman, The X Files and X-Men Legacy.

I keep getting fooled by Marvel's event miniseries. Every time I read one it disappoints me, because it doesn't so much have a beginning, middle and end so much as a beginning, middle and climactic advertisement for another comic. This one actually has four: there's no satisfactory conclusion here, just story threads that expand out into Hunger, Guardians of the Galaxy, Avengers AI and Age of Ultron #10AU - whatever the hell that is. So to save time: Wolverine saves the day, but breaks the time-space continuum in the process, the Marvel Universe Galactus is now about to eat the Ultimate Universe Earth, Hank Pym is going to build some new robots, a supporting character from an early 1990s independent comic book nobody cares about any more is now in the Marvel Universe, and Brian Bendis and his artist buddies have cheated readers out of US$39.90 leaving us with nothing to show for it bar resentment and shame. (1/5)

The problem with Batman is that he's often written as such a brooding, dark figure that it's very easy for him to come across as petulant and childish. That's certainly the case here, where we've now run enough months in a row of Batman's trauma over losing Damian that he's coming across like a child throwing a tantrum rather than a grieving father. Far more successful in this issue is Barbara Gordon's continuing reaction to killing her brother; in many ways it's a redundant plot line, since readers of Suicide Squad know that he's actually still alive, but it's great character work and really does save this issue. (3/5)

I've never really warmed to Killer Croc, who sits somewhere at the silly end of Batman's list of recurring villains. He's been used quite a bit in the New 52, however, not only here but also in Ann Nocenti's underrated Katana. I have to admit, however, it wasn't until this issue that I finally found an "in" to understanding, appreciating and actually liking the character. Williams and Blackman tell a really strong story here - so strong that I really hope they continue along this line with the character in future issues. Guest artist Francesco Francavilla brings the goods; it's always a pleasure to read a comic book that he's drawn. (4/5)

It Girl and the Atomics #11

I don't know if it's just this current storyline, or the fact that this book has been cancelled (it ends next issue), but it really feels as if It Girl has had the wind knocked right out of it. The sense of play and light-hearted tone that drove the book back when it started seems to be gone and now it's simply running through the motions. There's a note at the end here that mentions the end of "the first series", which implies It Girl will be getting a relaunch in the future. I'm behind that, but only if they recapture the tone they established so well back when this volume began. (2/5)

Oh this book is just a mess. This is 20 pages of action and carnage with too many characters, too many locations and no real recaps to let the reader remember what the hell is going on. It's not helped by Jeff Johnson's slightly busy and muddy artwork. This book has now been cancelled, ending DC's third Legion volume in eight years. I do think there's enormous potential for a Legion book at DC, but they really need to sit down and work out how to repackage this concept for a contemporary audience, because the massive cast of randomly named superheroes with differing generic powers really isn't working any more. (1/5)

Revival's second story arc comes to a close with this climactic issue. It's a stunning comic book, high on tension yet filled with wonderful moments of character. Mike Norton's expressive artwork does nothing but enhance and enrich Tim Seeley's writing. This is hands-down one of the best comics that Image currently publishes, and I wish it was selling more copies than it is. Every fan of DC Vertigo should be tracking it down and buying it. Every reader of The Walking Dead should be tracking it down and reading it. There's a trade paperback of issues #6-11 coming out next month, and the first trade paperback's been out for ages. If you're not onboard the Revival train yet, climb on: you'll thank me. (5/5)

Reviewing this book sometimes feels completely redundant. Beautiful dialogue and characterisation? Check. Brilliant and expressive artwork? Check. Inventive and cinematic panel layouts? Check. Inventive remixes of old Marvel storylines and characters? You bet: this issue introduces the Ultimate version of Cloak and Dagger, and they're a highly engaging and enjoyable team to read about. It's early days, but I'd certainly consider reading a Cloak and Dagger miniseries if Bendis writes it. (4/5)

Wild Blue Yonder is a Kickstarter project, funded by comic book fans and now published to a wider audience via IDW. It's also a wonderful new take on the post-apocalyptic adventure story, taking place as it does not across a desolate wasteland but miles above it. This is a comic book of raiders, pirates and scavengers living their lives on mountaintop settlements and in creaking, decrepit flying machines. Great concept, great artwork, and a smart new take on old material. It's a five-issue miniseries, but based on this first issue I'd be happy to see a few sequels. (4/5)

The First Born arrives in London to take Zola's child, with only Wonder Woman and her friends standing in his way. I'm not going to lie: while I love the writing and art on this issue, I'm really beginning to feel plot-arc fatigue from the past two years of baby-defending Greek God hijinks. I think it's limiting Wonder Woman's potential and is starting to really drag on. The introduction of some more New Gods at the issue's end gives me hope for some more interesting stuff down the line, but as it stands this arc really needs to wind up soon. (3/5)

What you, the reader, will get from this comic book will depend entirely on how much love for The X Files you bring to it. Like Dark Horse's successful Buffy comic books, this new series is being advertised as "Season 10": it's produced and co-plotted by series creator Chris Carter, and follows on pretty much directly from the 2008 X Files movie, I Want to Believe. This gives it an air of authenticity beyond what you normally get from this sort of tie-in fiction. Michael Walsh captures the likenesses of the series cast brilliantly, and Harris writes a script that pinpoints exactly the tone and cadence of Mulder and Scully's relationship. If you're not an X Files tragic, this comic is still pretty entertaining. If, like me, you stuck through all nine seasons and both movies, this is like slipping back into a comfortable pair of pants. (4/5)

David Haller faces off against the man who stole his father's brain - the villainous Red Skull. Once again this is a really fun issue. Now we're a full 12 issues into the book, it's impressive how Spurrier has built up such an engaging cast of mutant character to surround David and enrich his story. Bits of this issue surprised me, other bits made me smile and laugh. This is a grat, wonderfully enjoyable superhero book that more people should be reading. (4/5)