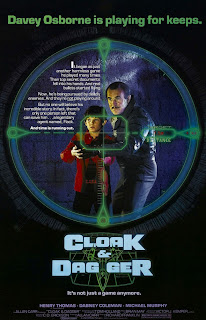 Cloak and Dagger is an amiable children's thriller from 1984. I liked it as a child, and with Umbrella Entertainment finally releasing it to DVD in Australia I figured it was a great opportunity to revisit my childhood and see whether the film stood the test of time

The film follows Davey (E.T.'s Henry Thomas), who receives an Atari game cartridge containing a secret CIA computer chip. Helped by his imaginary friend, superspy Jack Flack (Dabney Coleman), Davey goes on the run from the operatives who are prepared to kill him to get it back. It was directed by Australian Richard Franklin (Patrick, Brilliant Lies) and released by Universal Pictures as a double-bill with The Last Starfighter.

So has it stood the test of time, or has it received a visit from the dreaded 'suck fairy'? Well... yes and no.

It's nowhere near as good as the best children's films of the 1980s, but then neither is it an out-and-out disaster. It sits somewhere in the middle, blending excellent scenes of tension and suspense with some fairly trite cliches. One thing I will say for it is that it's surprisingly dark and confrontational for a children's film. People get shot. You see people bleed. Several characters die.

Henry Thomas was a brilliant child actor, and was largely responsible for making E.T. the Extraterrestrial the international success that it was. He's on top form here, playing a boy who's receded into spy games and role-playing as a means of coping with his mother's death. Over the course of the film he finds that real spy games aren't nearly as fun. Dabney Coleman is also extremely good in the dual role of Davey's father and of Jack Flack, the fictional superspy that Davey regularly imagines to be by his side.

Sadly much of the supporting cast aren't as good. John McIntyre and Jeanette Nolan play an elderly couple who've apparently walked off the set of the The Wonderful World of Disney. Eloy Casados and Tim Rossovich play two bumbling mercenaries set on hunting Davey down - Rossovich in particular fails to convince; he seems less like an actor (he's actually a football player, to be fair) and more like Will Ferrell in a fake moustache doing an impression of Rossovich playing a mercenary.

Ultimately, however, it's all rather fun. It's not as good as many of its contemporaries (certainly in a double bill with The Last Starfighter it's the lesser film), but it still entertains - both intentionally and occasionally by accident.
Posted by Grant at 8:55 AM