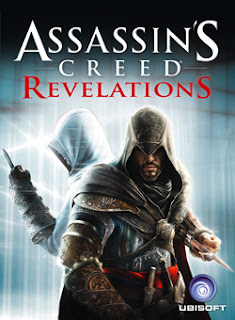 Some time ago I reviewed Assassin's Creed III, the most recent installment of Ubisoft's complex science fiction/historical epic. I was deeply unimpressed by it, finding that the game had removed much of the freedom that previous versions of the game had allowed and replaced the charismatic protagonists of the other games with a surly and unlikeable one.

Feeling the itch to play more Assassin's Creed in the style that I had come to enjoy, I finally got around to purchasing the game released before last year's edition: the 2011 sequel Assassin's Creed: Revelations. This game once again follows Italian assassin Ezio Auditore, this time following in the path of the original game's protagonist Altair and searching Constantinople for five missing keys that will open a centuries-old library. It's very much the final part of a trilogy, comprising Assassin's Creed II, the Rome-set Brotherhood and then this.

It's wonderful. It's exactly the sort of game that made me such a fan of Assassin's Creed in the first place, and a wonderful palette cleanser after the disappointment of last year's effort.
Ezio Auditore must surely go down as one of videogaming's best protagonists: charming, witty, driven and honourable. In this game you play Ezio as a middle-aged man, now thirty years into his adventures as an assassin. His age shows in his body language as he fights continuing waves of Byzantine guards, and in the soft grunts and barely audible gasps he makes as he jumps from rooftop to rooftop.

Also getting old is original assassin Altair, last playable in the original Assassin's Creed all the way back in 2007. Here we get a series of flashbacks showing the final decades of his life. By the end of the game both men's stories are resolved, and the stage is set for what should have been a resounding climax. Ah well. On its own merits the game's story might be lacking a little, as it's mainly concerned with wrapping up all of the plot threads left over from the first three games. If you've played those games, Revelations is a wonderful climax in and of itself. All Assassin's Creed III has left is getting the player to save the world.

I find whenever I talk about Assassin's Creed I talk about the characters, and the locations, and the storyline. Truth is the gameplay is so wonderfully playable that it deserves more attention. Combat is immensely satisfying, as is simply climbing the nearest building and exploring the city from above. This is how sandbox games should work: a setting, a skill set, and the freedom to go and do what you want in between the more structured missions.

Assassin's Creed IV is due out this October, and promises ocean-going exploration and adventure. I hope they also remember to make it fun, otherwise Revelations will continue to reign as the last good game in the franchise.
Posted by Grant at 1:39 AM