Under the Dome: "Pilot" 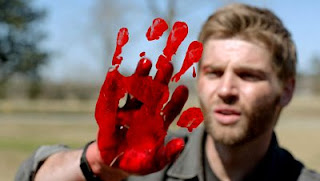 Bless Australia's Ten Network for arranging to broadcast Under the Dome in this country less than a day after it's US broadcast: it's been obvious for years that this is the best strategy to combat online piracy, yet for the most part Australia's networks have resisted the urge to do this. I think this was the first full hour of commercial television I have sat through since 24 ended.

Under the Dome is a 13-episode adaptation of Stephen King's science fiction novel, in which a small American town is mysteriously enclosed within an impenetrable dome and cut off from the rest of the world. While key residents of the town look for a way out or a means of destroying the dome, some begin to use the isolation to their advance and others begin to slide into a pit of madness and murder. The series is produced by King alongside Steven Spielberg, while the head writer (and the writer of this pilot) is Brian K. Vaughan of Saga and Y: The Last Man fame.

For the most part this pilot is very, very good. It does have a few poor elements, and we'll get to those in a moment.
One of the things that Stephen King is exceptional at is ordinary life. His novels are almost entirely tales of dull, small-town folk thrown into impossible situations and forced to fight their way out or escape. Under the Dome is no different, with a cast of engaging character with which most viewers can relate.

When the invisible dome descends onto the town a few minutes into the pilot, it's achieved with the perfect sense of unimaginable horror. People are killed driving their cars into the side of it. An aeroplane crashes. A row of buildings - and a particularly unfortunate cow - are sliced in half. What is particularly effective is that the dome is soundproof, and this is repeatedly exploited to brilliant effect. I think the last time an American TV drama opened in such a dramatic and eye-catching fashion was the pilot of Lost, and that's an interesting thing because I strongly suspect that Under the Dome is going to fall into the same pitfall in the coming weeks.

Put simply: the most interesting aspect of Under the Dome happened less than 10 minutes after it started. It is extremely unlikely that anything more dramatic or memorable will happen from here on in. This problem is one that Lost struggled with for several weeks, and going back a few more years it's one that pretty much hobbled Twin Peaks for most viewers after its first season. I've read that if this 13-episode season is a success then Under the Dome may keep going, and I can't really see how that's going to work. There are plenty of plot threads introduced in this pilot, but they're essentially personal dramas, and like Twin Peaks before it there's a risk that within a few weeks Under the Dome is going to turn into a sort of grim, off-kilter soap opera.

There's only one plot thread that soured the episode for me, which was Jim Rennie Jr's assault and kidnapping of Angie because she didn't want to be his girlfriend. It seemed over-the-top, and oddly timed in relation to the dome's arrival, and just...

I don't know. Some days I feel like I can't watch an American TV drama without seeing women being threatened with violence, both sexual and non-sexual, in this sort of sensationalistic manner. It feels tacky and unpleasant, and for me didn't feel believable in the context of the episode's other plot threads. I suspect the reason it's there is because Vaughan wanted to incorporate elements of Junior's plot from the book in some manner, but clearly couldn't use the actual plot on a network TV drama (in the book, Junior's girlfriends are already dead if you catch my drift).

Ultimately Under the Dome shows promise, but at the same time it shows a lot of signs I've seen in TV before. In the long run this show could go either way. For now, it's definitely watchable and quite enjoyable.
Posted by Grant at 9:26 AM