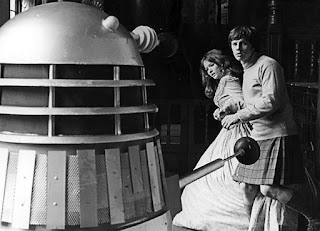 Who50 counts down to the 50th anniversary of Doctor Who by reviewing my favourite episodes and serials over the history of the programme, counting down from #50 to #1. Today, #21: "The Evil of the Daleks", a 1967 seven-part serial written by David Whitaker and directed by Derek Martinus.

To wind up Patrick Troughton's first year as the Doctor, the Daleks returned in this epic seven-part serial by David Whitaker. Whitaker had already introduced Troughton's Doctor in a Dalek serial some months previously, and together "The Power of the Daleks" and "The Evil of the Daleks" act as wonderfully dramatic bookends to the season. (Of course there are two William Hartnell serials tacked onto the start of the season, but in retrospect they feel more like leftovers from Season 3.)

When I describe "The Evil of the Daleks" as epic, I mean it; the story begins with the TARDIS being stolen from Gatwick Airport in 1966 before travelling back in time to the 19th century and then across the universe for the Doctor's confrontation with a Dalek Emperor on the planet Skaro. At the time it was considered to be the final Dalek adventure, since Terry Nation was keen on shipping the Daleks over to the USA for an attempt at their own television series. In the context of Doctor Who's 50 year history, this is one of the best Dalek stories ever recorded. In the context of its own time, "The Evil of the Daleks" is nothing short of the climax to the first four years of Doctor Who.

Sadly "The Evil of the Daleks" is, with the exception of its second episode, missing from the BBC archives. As a result we can only experience it via audio recordings made by fans in 1967. Once again I'm thankful to them, since despite the lack of visuals it remains a stunning work of episodic television. Doctor Who works best when it presents the viewer with sights all-but-impossible in any other TV drama. Here we have the incongruous image of Daleks wheeling around the halls of an English manor, planning to commit genocide but still finding time to chastise teenage girls for feeding sparrows.

Surely there is no historical period better suited to Doctor Who than Victorian England. It took four years for the series to get here, but now that it's arrived it will return many times, in "The Talons of Weng-Chiang", "The Mark of the Rani", "Ghost Light", "Tooth and Claw", "The Next Doctor", "The Snowmen" and "The Crimson Horror". This period is one that the BBC can do in its sleep, and it's a wonder the series doesn't exploit that more often.

This serial also sees Patrick Troughton's Doctor arguably at his height. He's playful and serious in turn, deeply manipulative and occasionally even actively untrustworthy: certainly Jamie's faith in the Doctor is sorely tested by the time things come to a close.

At the serial's climax the Doctor finally comes face-to-face with the Dalek Emperor. Most long-term fans of Doctor Who have seen the photographs of it, twelve sided and immobile, and kind of chunky-looking. What many fans seem to have missed is just how massive the Emperor is. Combined with its booming, authoritative voice, it makes for a stunning arch-nemesis. The Doctor even comments that he'd wondered when he'd eventually meet the Emperor, as if each encounter over the previous four seasons had all been part of some running war between the two. The idea of the Daleks having an emperor has been revisited twice, first in "Remembrance of the Daleks" and then in "The Parting of the Ways" - in neither instance is that emperor half as effective as the original is here.

After "The Evil of the Daleks" it took five seasons for the Daleks to return. There's never been such a prolonged gap between Dalek serials ever since. Had this remained their final television appearance, it would have been an epic, fitting send-off indeed.

To read more of my Who50 posts, click here to see the complete countdown to date.
Posted by Grant at 10:41 PM