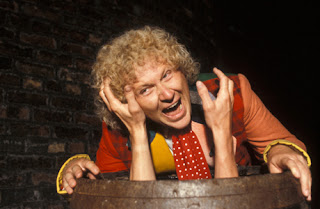 Throughout 2013 I've been highlighting my 50 favourite Doctor Who stories and serials, counting down towards the 50th anniversary in November. Of course, as I have favourites it logically follows that I have least favourites. Doctor Who may be my favourite TV show, but that doesn't mean it's always good. Sometimes it's rather bad. Sometimes it even makes me want to punch my fist through the TV screen.

So this week I thought I'd examine a few of the low-lights of television's greatest science fiction drama. We're going to count down from #20 to #1. These are, in my opinion, the very worst Doctor Who has to offer. Today it's #16-20. I'm sure sooner or later I'm going to cite one of your favourites as one of my least favourites - feel free to defend the indefensible with a comment.

You almost want to give Davies points for trying, and certainly I've long been a staunch defender of "Love and Monsters". It's a Doctor Who episode that experiments with not having the Doctor in it, and in being and out-and-out comedy, and in leaving it to a child to design the episode's central monster via a Radio Times competition. So top marks for thinking out of the box, and to be honest that inventiveness does soften the blow somewhat that "Love and Monsters" is irredeemably terrible.

1987. Written by Pip and Jane Baker. Directed by Andrew Morgan.

What a mess. It's easily the most garishly colourful Doctor Who serial ever made. Everybody's overacting in it. Sylvester McCoy clearly doesn't know what he's going to do with the part yet. Bonnie Langford is very Bonnie Langford. The plot doesn't make a lick of sense. Kate O'Mara, so effective as the Rani two years earlier, just looks vaguely awkward and embarrassed here. There may be (in my mind) eighteen worse stories than this in Doctor Who's 33 seasons, but there are no writers as appallingly untalented as Pip and Jane Baker.

The Daleks return! It's just a pity they don't really do anything. This episode feels like a mad collection of weird concepts that were simply thrown onto the screen without anyone actually bothering to write a script that incorporated them. We get military green servant Daleks ripped from "The Power of the Daleks", we got an oddly jolly Winston Churchill who looks and sounds nothing at all like Winston Churchill. We get all-new Dalek designs that absolutely everybody hates. We get a big promised lead-in to a Dalek epic that, to date, has never happened. We get Spitfires in space for no good reason. What we don't get is a plot: nothing actually happens in this episode. It's an awful waste of money and space.

#17: "Daleks in Manhattan"/"Evolution of the Daleks"

Doctor Who treads a fine line between being scary and being silly, and if it slips up - as I think it does here - it just winds up being dreadfully silly without any gravitas to balance it out. Dalek mutant heads on humans in pin-stripe suits aren't scary in the slightest, and the one redeeming feature of this story is that it let us all make that "Sec's in the City" pun over and over. It's rather sad that this is modern Doctor Who's sole story written by a woman - Steven Moffat should probably do something about that. 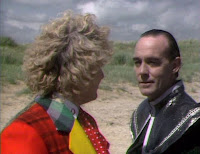 1986. Written by Robert Holmes and Pip and Jane Baker. Directed by Chris Clough.


It's not really anybody's fault that this, the two-part finale to "The Trial of a Time Lord", is as awful as it is. The original writer, Robert Holmes, died. The second writer, script editor Eric Saward, quit the series in a fit of pique and refused to allow the production to use his script. The third and fourth writers, Pip and Jane Baker, weren't allowed to see the earlier drafts and had to make things up over a weekend as they went along. The result is a confusing mess: too long to be a diversion and too short to really mean anything. The rest of "The Trial of a Time Lord" was pretty ropey, but you could cut it some slack because it was clearly building to a grand finale; that finale never came.
Posted by Grant at 9:11 AM