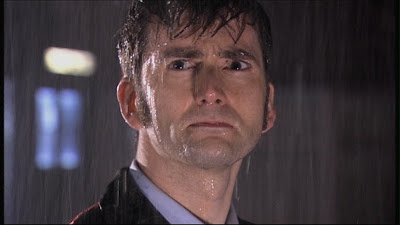 Three more godawful Doctor Who stories that, in the words of The Simpsons' Comic Shop Guy, I hate so much that I will only watch them two or three more times.

"The Stolen Earth" was a shameless celebration of the Russell T Davies era of Doctor Who, bringing back as many characters as he could pack in, as well as the largest Dalek invasion of Earth he'd ever attempted. It reunited the Doctor and Rose, and built up to one of the best cliffhangers the series has ever had, with the Doctor in the middle of an unexpected regeneration.

Then we get "Journey's End", where the Doctor doesn't regenerate at all in what still feels like the cheapest cop-out the new series has attempted. By the end everybody's laughing around the TARDIS console while towing the planet Earth through the universe at a billion light years an hour, leaving the Doctor just enough time to give Rose her own David Tennant sex doll before giving Donna Noble a lobotomy and having a bit of a cry.

All joking aside, I can not think of another case in the entire history of narrative television where a writer has so ruthlessly betrayed and demeaned one of his or her own characters in the manner that Davies screws over Donna. It's mean, pure and simple, adds nothing to the plot and achieves nothing beyond making me want to throw a brick through my television screen and punch the author in the face. He got a chance to redeem himself a year later when he brought her back in "The End of Time", but figured why the hell restore and heal Donna when he can kick her a few more times instead?

This episode also kicks off the deeply tedious year of specials, which I always like to think of as "David Tennant has a bit of a cry in the rain, because it's so hard being a godlike super-alien who can go anywhere in time and space on a whim".

Ah, to a story that's awful for such a completely different set of reasons it's likely to give you whiplash. "The Underwater Menace" comes from a period where the series was struggling to get scripts completed in time, so this effort made it into production pretty much for no other reason than they didn't have anything else to shoot.

It's Doctor Who as seen through the lens of a bad 1950s sci-fi movie, full of madcap plans to drill to the centre of the Earth, turning humans into underwater ballet-dancing fish people, and a silly over-acting villain with a German accent screaming (all together now) "nothing in ze vurld can stop me now!!'. 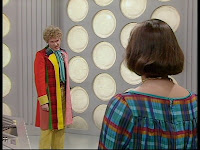 Well I'm hardly alone in hating this one. A Doctor Who Magazine poll in 2009 asked fans to rate the 200 Doctor Who TV stories from "An Unearthly Child" to "Planet of the Dead", and this four-part serial - the first for Colin Baker as the Doctor - came 200th.

A lot of people's distaste for the story comes from the Doctor's regeneration beginning to fail, leading the Doctor to become erratic and violent and attempt to strangle Peri to death. I actually find that one of the more interesting ideas in the story. It's incredibly poorly done, but at least the basic idea is sound. A larger problem is that the rest of the story is simply very, very boring. There are some nice touches that lift it up from being irredeemably dreadful, like a nice depiction of a humanoid race descended from birds - something you don't often see in SF television, but ultimately it's just an awful snoozefest.

And believe it or not, there are three entire adventures that I think are worse than this.
Posted by Grant at 11:07 AM