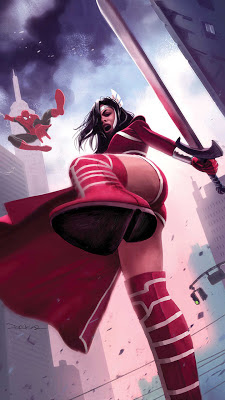 Pity the female superhero. For a while I thought things were genuinely looking up, particularly at Marvel where a string of female-led superhero comics have been launched in the past 12 months. Then comes the dips in sales, the lack of enthusiastic marketing and, ultimately, cancellation.

So I knew that Red She-Hulk was finishing at the end of its current story arc. It's pretty obvious that Katana will bow out by October. Now I hear that the final issue of Journey to Mystery, starring Asgard's Lady Sif, comes out in September.

I applaud Marvel and DC for giving more female-led titles a chance, but I really hope the failure of so many books in the current wave don't deter them from trying again. The tragedy is that these comics have been some of the most consistent and enjoyable books either company's been distributing lately.

Last month I was unsure of Gail Simone's new version of the Ventriloquist. Now that I've seen exactly what the character is like, and what she can do, I'm sold. I may still quibble over whether they needed to call this new villain after an old one - she's more than capable of being a fresh villain in her own right - but this is one impressive and deeply creepy new antagonist. The rest of this issue really plays to Simone's strengths, as Barbara continues to suffer the after-effects of killing her brother James. Fernando Pasarin does some exceptional character art - one panel of Barbara in particular is absolutely heartbreaking. (5/5)

I've really enjoyed Scott Snyder's method of writing Batman as a series of "event" miniseries, with the odd single or double issues stories in between. This month we start "Zero Year", an 11-issue retelling of Batman's origin. It's a big risk for Snyder and Capullo, because more than anything this re-treads a lot of very well-trodden ground, including Frank Miller's "Year One" as well as Christopher Nolan's Batman Begins. So far they're pulling it off superbly. The issue is littered with visual references to Batman's 1930s origins, whether it's the colour of a pair of gloves, the bat-like silhouette of a skyscraper or the shape of a car. Some months it feels as if this is the superhero comic that can do no wrong. This is absolutely one of those months. (5/5)

Another issue of fun fantasy adventure, another issue closer to Demon Knights' much-lamented demise. I've really liked this inventive little corner of the DC Universe, and DC's superhero line is going to be just that little bit weaker without it. Here the hunt for the Holy Grail continues, with some great scenes between Vandal Savage and Jason Blood - not to mention some great bits for Etrigan as well. I do hope that when this book taps out in a month or two that its wonderful characters don't get forgotten. (3/5)

The big surprise with this issue is that we've jumped forward a considerable distance in time, to find Chas Worthington's dream of establishing a colony on the Great Pacific Gyre has become a reality, and the population of his "New Texas" has increased from three to 705. This is a great jumping-on point for new readers, and has energized the book for its second story arc. For the most six issues I was moderately entertained by Great Pacific. With this new issue, I'm pretty sure I've moved from entertained to gripped. (4/5)

This continues to be a really enjoyable series, blending superhero tropes and Japanese myth and iconography. I adore that they've re-imagined the Creeper as a bakemono, for example, as well as the detail in this issue regarding how difficult it is to re-forge a broken sword. It's a shame that series simply hasn't taken with a sufficient audience - I strongly suspect the October issue will be it's final instalment. (4/5)

Any self-respecting comic book reader should get as far as seeing Becky Cloonan's name and pick this book up on instinct. I certainly did, and her art is predictably marvellous. Writer Gerard Way, who earned a lot of acclaim for his earlier comic book The Umbrella Academy, is also the lead singer of now-defunct pop group My Chemical Romance, and apparently this book is in some way based on that band's work. I'm just taking the Internet's word for that: I've never read Way's work before and couldn't tell you a single song by My Chemical Romance. What I do know is that this is a strong, intriguing and eye-catching first issue, filled with near-future dystopia and teen rebellion. (4/5)

In "The Fermi Paradox", the Projects team discover the unexpected true identity of physicist Enrico Fermi, with grave consequences for their future. Some months it feels like The Manhattan Projects is just a free-wheeling series of random weird episodes. Other months, like this month, everything falls into place and you realise that Hickman is writing to a plan, and it's a complex, smart one at that. This is the sort of issue that makes you go back and re-evaluate entire sections of the comic so far and discover that scenes you thought meant one thing actually meant something altogether different. Nick Pitarra's grotesque artwork continues to suit this book to a tee.(5/5)

This series continues to be great, taking elements from throughout the Star Wars saga and distilling them into a wonderfully accurate follow-up to the original 1977 film. This feels like a direct follow-on from Star Wars (oh okay, A New Hope, you pedants), but manages to feel faithful to the various sequels and prequels at the same time. Wood also continues to write Leia Organa as the badass she is too - that counts for a lot. If I have a request for the next few issues, however, it's "less rebels, more Han and Chewie". They really miss out this month. (4/5)

This issue is pretty much the one we've all been waiting for since this book launched: three Thors, one from the past, one from the far future and the one we're all well familiar with, team up to take down Gorr the Godslayer. This is exactly the sort of cosmic god-vs-god action that Thor does best, presented on a scale that puts other superhero fights to shame. Aaron's script also cleverly distinguishes between the three Thors, giving each one a very distinct personality while still making them feel like the same man at different stages of his life. Esad Ribic's painted artwork continues to bring out the epic feel of the storyline. This is just the perfect comic book. (5/5)

Power Girl and Huntress are on the trail of the elusive DeSaad, and he's got an army of mutated henchmen on the hunt for them. The introduction of Apokolips' chief torturer to the New 52 has really energised this book, and tied a lot of the first year's material together very well. Levitz continues to write the hell out of Power Girl and particularly Huntress - which is fair enough, given that he created the character. With so many female-led titles getting cancelled at the moment, I'm really hoping that this one makes it through - it's too enjoyable a comic to lose. (4/5)

Winner of the Week: Batman, with a new arc chock-full of easter eggs.
Loser of the Week: My lowest-rated book scored a 3; there is no loser this week.
Posted by Grant at 6:08 PM