Who50: "The Empty Child"/"The Doctor Dances" 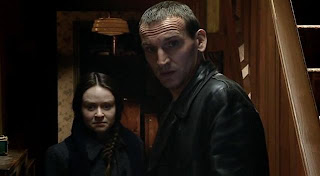 Welcome to the Top 20! Who50 counts down to the 50th anniversary of Doctor Who by reviewing my favourite episodes and serials over the history of the programme, counting down from #50 to #1. Today, #20: "The Empty Child" and "The Doctor Dances", a 2005 two-part serial written by Steven Moffat and directed by James Hawes.

Christopher Eccleston only played the Doctor for one 13-episode season, but it was such a critical year for Doctor Who that Eccleston managed to make a big impact in those 13 episodes. He is one of my favourite Doctors: deeply wounded and traumatised by war, struggling to recover and clinging on like mad to the first human he makes a connection with: Rose Tyler (Billie Piper). I was never a huge fan of the 10th Doctor/Rose pairing, but I love the 9th Doctor/Rose pairing to bits. In short: Rose saves him, and in return - in the season finale - he saves her.

Before the finale, however, there's this: a creepy, disturbed story of possessed children wearing gas masks, stalking the empty streets of World War II London.

We're back to classic Doctor Who body horror - as with "The Ark in Space" a few weeks back, this adventure is terrifying because the monster isn't something external, it's you. It's an infection that makes a gas mask burst and crack its way through your face, turning you into what is for all intents and purposes a zombie. A zombie that constantly asks its victim if they're its mummy, sure, but a zombie nonetheless.

On top of this creepy-as-hell body horror, writer Steven Moffat drops in time-travelling rogue Jack Harkness. I have an ambivalent reaction to the character. In this story he works brilliantly. He's overly charming, fairly sleazy and visibly untrustworthy. His overtures toward Rose spark some genuinely funny jealous reactions from the Doctor, who really doesn't seem to like him too much. Jack will hang around for another three episodes before splitting off to star in his own spin-off, Torchwood, in which he is by-and-large broadly intolerable to watch. Early Captain Jack, however, works for me, and he's wonderfully entertaining here.

Most impressive of all, Moffat lets everybody live. It's such a rare event in Doctor Who to have a story without a bodycount. It's so rare, in fact, that Moffat makes a point of it here. The Doctor's sick of people dying, so today "everybody lives". He's been put through the wringer, survived a Time War, committed mass genocide and waded up to his hips in Time Lord and Dalek blood, but today, just for once, everybody lives. There's such a beautiful arc to the 9th Doctor's character, and it's one of the many reasons he became one of my all-time favourite Doctors. Fantastic!
Posted by Grant at 9:28 AM