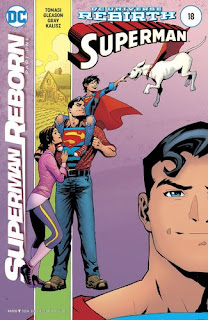 Over the past four weeks, between Action Comics and Superman, DC Comics has been publishing "Superman Reborn", a four-part storyline in which the identity of the second Clark Kent is revealed and where young Jonathan Kent is kidnapped with Lois and Clark hot on the trail to get him back. For readers who have been trying to follow the various plot threads launched by DC Rebirth, this is a pretty significant storyline. After a shipping delay forced me to miss the first issue I figured it was worth waiting a couple of weeks and reviewing the storyline all at once.

It all kicked off four weeks ago in Superman #18, in which the mysterious second Clark Kent turned up at the real Kent family home - and demonstrated some genuinely unexpected powers, like a magical blue flame that engulfs the Kent home and seemingly erases Jonathan from the world altogether. It's an attention-grabbing first issue, since it really throws the potential identity of the fake Clark way up into the air. It also includes a tantalising prologue in which one of Mr Oz's prisoners - we don't get to see which one yet - escapes from captivity.

Mr Oz, a mysterious hooded figure that has been kidnapping different characters to prevent them from acting on the DC Universe's changed history, is one of the ongoing mysteries of the Superman books, and his return here immediately signifies something of importance is kicking off. Patrick Gleason and Mick Gray's art is excellent, as it always is, and nicely coloured by John Kalisz. (4/5)

In an extra-length anniversary issue, Superman and Lois Lane confront the fake Clark Kent - only for him to reveal himself as none other than long-time Superman foe Mr Mxyzptlk. I did have a hunch. This is a much darker version of the character, one who was kidnapped by Mr Oz to prevent him from changing reality, and who became enbittered when Superman never arrived to rescue him. The story is told through some absolutely outstanding splash pages, including a double page reveal that actually makes the splashes - I usually dislike them - really feel worthwhile. A strong backup story by Paul Dini reveals more of what happened to Mxyzptlk during the DC Rebirth period. (4/5)

Superman is challenged to get to the top of Mxyzptlk's tower before he and Lois forget the existence of their son altogether. Visually this issue is outstanding: beautifully crisp, imaginative artwork, and some brilliant panel layouts. It's a feast for the eyes, as the saying goes. The storyline by this stage feels very refreshing: it's quite different from what's been presented in either book over the past nine months or so. Mxyzptlk is such a great villain to use, because he's well known but remains sparingly used. A great cliffhanger leads into the final issue. (5/5)

Great artwork by Mahnke and Mendoza enhance this pretty unexpected finale. One of the hanging elements from the New 52 to Rebirth transition was the fate of the New 52 Superman and Lois Lane, both seen boiling away in a supernatural fire. They are back here, after a fashion, as readers get the first proper indication of where the DC Rebirth over-arching storyline is headed. Two Supermans, two Lois Lane, united in love and somehow able to unite their two separate continuties into one. The New 52 elements have been absorbed, and Superman's story now combines the history of both. DC has always been a publisher happy to reboot and rework its continuity: it is doing it once again, and it feels both appropriate and exciting. The only let-down is the epilogue, pointing to the mastermind behind all of the continuity changes living on Mars. I swear to God if it's Dr Manhattan from Watchmen I am throwing a comic across the room. (4/5)
Posted by Grant at 2:18 PM