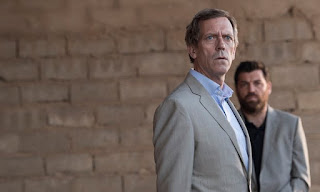 Everything comes full circle: Jonathan Pine (Tom Hiddleston) is back at Cairo's Nefertiti Hotel, where he was first drawn into the criminal world of Richard Roper (Hugh Laurie). Roper's arms deal is about to be made, and with Corky dead Jonathan is running out of avenues to keep Roper from discovering he is a spy. Angela Burr (Olivia Colman) is in Cairo to help, but can she do enough to help trap Roper and keep Jed (Elizabeth Debicki) out of harm's way?

There is a very pleasing symmetry to this final episode of The Night Manager. After moving from Cairo to Switzerland to Spain to Turkey, the series now snakes back to its starting point: a new deal, a new disguise, but the self-same hotel in which Jonathan originally worked as the titular night manager. It also brings him back in contact with corrupt Egyptian playboy Freddie Hamid (David Avery), whose murder of his lover brought a vengeful Jonathan to British intelligence in the first place.

It is a very satisfying climax, because it essentially gives the audience exactly what they want. We get to see Jonathan outwit Roper in a masterful piece of deception, snatching victory from the jaws of defeat and escaping a certain-death situation. We get to see Angela getting herself into the thick of the action, fending off armed assailants while pregnant. Perhaps most satisfying of all we get to see the downfall of the repugnant Freddie Hamid, a violent spousal abuser who murdered Samira Alekan (Aure Atika) all the way back in episode 1. No crime goes unpunished.

If there is a hint of disappointment to the finale, it is that victory ultimately seems to come with a cost. Jonathan gets away with his life, as does Jed. Angela gets her victory over the manipulative forces inside MI6. Hamid dies, and the last thing we see of Roper is him being taken away in a van by some very unpleasant arms trader who want their money back. Without a human cost - in blood, or reputation, happiness, what-have-you - it all does come across as a little bit superficial.

That is not really the point of The Night Manager, though. This has been Hollywood blockbuster as presented via a BBC miniseries: big moments of action, tense thrills, and broadly drawn characters. It has done a marvellous job in that respect, taking the seedy, conversational tone of John Le Carre's fiction and blending it with the glamorous high-stakes world of James Bond. If EON Productions are looking to replace Daniel Craig as 007, I'd say Tom Hiddleston has more than passed his audition.
Posted by Grant at 7:14 AM