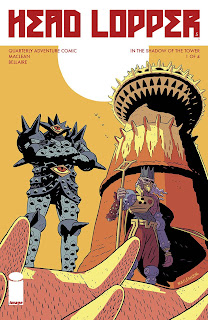 Head Lopper returns, with an all-new story arc but the same blend of simple, abstracted art work and Robert E. Howard-style sword and sorcery adventure. Norgal and Agatha are on a mission to enter the Crimson Tower and defeat the diabolical Ulrich the Twice-Damned. They are accompanied by a disparate group of other adventurers and - unexpectedly - a group of small goblin-like children.

Andrew Maclean is a tremendous talent, telling engaging fantasy stories with a strong sense of absurd humour. Anyone who enjoyed Trondheim and Sfar's excellent Dungeon series of graphic novels - and who wouldn't? - will find themselves very much at home here. Head Lopper also benefits from the extra length afforded to each issue. It makes the decompressed style and big colourful panels really work to the book's advantage.

Perhaps the book's greatest strength is that there simply is not another comic like it on the market. Maclean has established himself a comparatively exclusive niche with which to tell broad, entertaining pulp adventures with his own distinctive take. It is one of my favourite books in the US market today. (5/5)

Under the cut: reviews of All-Star Batman, Ms Marvel, Poe Dameron and Spider-Man.

In his search to destroy a prehistoric viral infection, Batman has tracked down Mr Freeze and Poison Ivy. Now he is hunting down Jervis Tetch, aka the Mad Hatter, so long as the Hatter's hallucinogenic gas doesn't destroy him first. As with the previous issues, this third part of "Ends of the Earth" is a bit of an experiment. It tells the story not through dialogue but a pair of competing monologues - one by Batman and one by the Hatter. It's intriguing, but also renders the issue a little bit muddled and confusing. I've never been a huge fan of the Mad Hatter as a villain, and sadly this issue does not change that opinion. It's competent and interesting, but also a little weaker than I've come to expect from Snyder. Guest artist Guiseppi Gamuncoli, with inker Mark Morales, does some fabulous work. (3/5)

Kamala struggles to defeat a sentient computer virus that is threatening to reveal all of her secrets to the public. Ms Marvel really is at its best when it uses superhero adventure to reflect teenage life, much in the manner that the television series Buffy the Vampire Slayer did back in the 1990s. Here it's all about secrets, and Kamala's struggles get echoed by the struggle of one of her classmates to out herself as gay and ask a friend out. Miyazawa's appealing art and Herring's bright colours make it a nice book to read, but really they're working from a great foundation. (4/5)

Poe and the droids crash-land far from rebel assistance, and begin a chase through a series of caves and tunnels - with Terex's soldiers in hot pursuit. It's a solid issue, entertaining but not outstanding, which pushes the story along nicely but never does anything to stand out or make the reader really take notice. One nice highlight involves Poe and C3PO: always a difficult character to write, because he was developed to have such an irritating personality. Charles Soule pulls it off here, which is commendable. To be honest they book's only real drawback continues to be the main one: Poe Dameron doesn't seem quite iconic or interesting enough to headline his own book. (3/5)

Spider-Man and Spider-Gwen continue their dimension-hopping adventure, as Miles searches for his missing father. This issue is an absolute riot, with repeated jumps from dimension to dimension setting up a brilliant string of gags and cameos. The better-read Marvel fans should have an absolute ball with it. Bendis' gift for strong dialogue and character keeps it all focused as well: the personality of the various characters are what makes the comedy work as effectively as it does. (4/5)
Posted by Grant at 10:07 AM