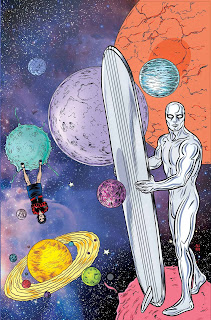 Dan Slott and Michael Allred's run on Silver Surfer continues to be a sweet confection among Marvel's usual mess of crossovers and tie-ins. Ironically it was one of those incessant tie-ins that caused the book to stagger back in early 2016. That coincided with a significant slowdown in the pace of this title: since relaunching off the back of Secret Wars it has only managed nine issues over 15 months.

This ninth issue is the sort of self-contained story that makes the delays worthwhile. The Surfer and his companion Dawn discover a star system where the first three planets are devastated wrecks, but the fourth boasts a thriving civilization. While meeting the inhabitants, they discover the same people wrecked the other three worlds via environmental damage. The secret of how they have survived so well the fourth time around forms the core mystery for the Surfer and Dawn to solve.

Slott's intended model of treating the Silver Surfer as the Marvel Universe version of Doctor Who works incredibly well here. The plot is simple enough to fit comfortably into 20 pages, but still finds room for moments of character and some larger-scale story developments. Michael and Laura Allred do a predictably great job with the artwork. It is simple, but hugely engaging. (5/5)

Under the cut: reviews of Batgirl and the Birds of Prey, Detective Comics, Star Trek: Waypoint and The Wicked + the Divine.

Batgirl and the Birds of Prey #8

Nightwing joins the Birds of Prey in a hunt for the super-villain Gemini in the all-new story arc "Blackbird". Nice action and great character interplay do a fine job of masking the slightly ordinary-looking storyline. On a panel-to-panel basis this is all very entertaining stuff, but by issue's end I did not find myself overly desperate to read what happens next. Roge Antonio's artwork is solid. Allen Passalaqua's colours have a nice sense of balance to them, with each scene allowing a different palette to come forth. (3/5)

One assumes the fortnightly DC Comics schedule has caught up with Detective Comics, with five separate artists working to produce just 20 pages of art. The aesthetic changes do get a little jarring, and this damages an otherwise exceptional issue. The League of Shadows has hit Gotham City, with Batman framed for the mayor's murder and Cassandra being watched by her mother - the master martial artist Shiva. It is a strong multi-character story arc with high stakes, strong characters and great developments. (4/5)

IDW's celebratory anthology series continues, with one story from Enterprise and the other from The Next Generation. In "The Fragile Beauty of Loyalty", by Tiwary and Petrus, Captain Archer's pet dog Porthos goes on a time-travelling adventure to save his master. It is a fairly silly story, albeit one with decent art, but it is relatively disappointing that the opportunity of the first-ever Enterprise comic book is wasted on such a ridiculous plot. In "Mirror, Mirror, Mirror, Mirror", by Wilson and Wingaard, Worf and Crusher find a strange plant life on an unexplored world, with unexpected results for them. It is an interesting concept, but lacks the room to fully flesh out its ideas. It is also hampered by unnecessarily dense dialogue and slightly awkward-looking artwork. Anthologies are hard comics to produce, and this one really does not do the best job of creating satisfying short-length storylines. (2/5)

With the 'great darkness' seemingly tracking down and attacking the Pantheon, they have collectively gone their separate ways to either avoid it or try and defeat it. Structurally this is a tremendous issue, with multiple simultaneous plot strands running across each page. It is a technique I have seen before, in Grant Morrison's Zenith, for example, but here Gillen takes it a whole extra step forward. It's enormously readable and dynamic. It is still a little unclear in which direction WicDiv is all headed, but it is doing a very entertaining and dramatic job of getting there. (5/5)
Posted by Grant at 5:05 PM