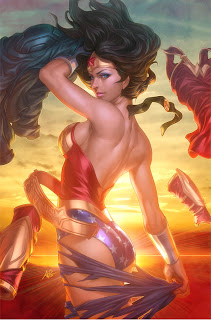 The bottom line for me is that there isn't actually a problem with Wonder Woman's traditional "no pants" costume at all; the problem has come from the way it has been drawn. There's a nasty over-sexualised aesthetic that crept into comic books in the 1990s and is still around today. My extremely talented and wise co-podcaster Kitty once summarised it excellently (and bluntly) as "Male superheroes are what male readers want to look like, female superheroes are what male readers want to fuck". In this context Wonder Woman looks ridiculous. I've attached a few pictures of recent depictions of Wonder Woman to this post. If you want more, just typing "wonder woman" into the search box on Deviantart will give you enough amateur and professional examples alike to make you want to cry. The image at the top of this post (by Stanley Lau aka artgerm) is a good example: it not only puts Diana in the classic "look at my breasts and my butt" pose, but it gets bonus points for her stripping at the same time. 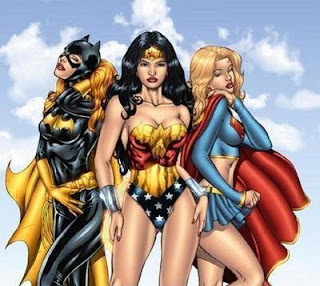 But take the image to my left (artist unknown): Unlike Wonder Woman Batgirl is clothed head to foot, with only her eyes and the lower half of her face exposed. Despite this she's still visually constructed as a lust object for a male gaze. The problem isn't the costume. If anything, the precise cut of Wonder Woman's costume in any given illustration is a symptom of the art style rather than a misogynist object in itself.

This isn't to say I wouldn't make changes to the costume if I was King of DC Comics (And you know what? I absolutely should be). On a very basic level I still like it: she's supposed to be an Amazon princess and warrior, and the breastplate suits that look, as does the tiara and the gauntlets. And the fact of the matter is that Greek warriors of any gender quite simply didn't wear pants. 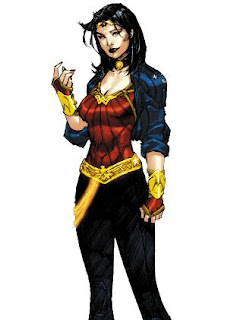 This is why, while I applauded DC's brief attempt to cover Diana up (Jim Lee, to the right), it didn't actually work for me in the final analysis. It draws the character too far away from the iconic visual elements that have made her such a perennial favourite (despite many poorly written comics and a complete lack of film adaptations).

If I was to point to a visual cue best suited to Wonder Woman (and I am by no means the first person to suggest this) it would be Xena: Warrior Princess. You could pretty much add the elements of Xena's attire that are missing in Wonder Woman's and find you've got the perfect costume. Shoulder pads that hold the breastplate up. A Greek-style leather skirt. An overall aesthetic that screams "armoured warrior" and not "lingerie".

Above all, however, the character deserves better artists who refuse to draw Diana in overtly sexualised poses (to his credit, current artist Cliff Chiang is doing a very decent job in this regard). We need strong writers who accentuate Diana's strength, wisdom and courage. She's always been one of DC's "big three", alongside Batman and Superman, and she remains one top-notch writer and artist team away from surpassing them both.
Posted by Grant at 1:35 PM