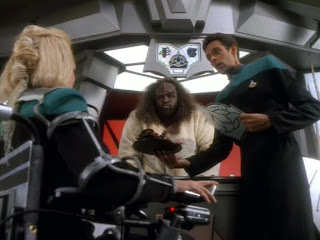 An officer from a low gravity planet is temporarily assigned to Deep Space Nine. While attempting to find a way to enable her to move about the station without a wheelchair, Dr Bashir begins to romance her as well. Meanwhile, an ex-convict arrives on the station with a plan to murder Quark - whose betrayal put him in prison in the first place.

It's an odd coincidence that shortly after watching Babylon 5's "Believers", an episode with a good basic premise let down by poor execution, I found myself watching Star Trek: Deep Space Nine's "Melora", an episode produced with the best of intentions but let down terribly by very similar pitfalls.

Star Trek, more than any other SF television franchise or series, has always been about allegory and metaphor. It is a series where real-life social or political concerns may be interrogated in a safe, fictional context. "Melora" is the "disabled" episode: it introduces a character with limited general mobility, confined to a wheelchair, and offers her the potential of a permanent cure to her disability. This is the most tired and to be frank offensive trope of the disabled in science fiction. It is the story about the "miracle cure", where a character is only given a disability so that it can be miraculously removed. In some cases (as here) the character may ultimately refuse the cure, because they feel that being disabled forms a core part of their identity. In other cases (Avatar being a notable example), the character is simply cured and goes about their fully-able day. Neither answer is satisfactory, because the question shouldn't have been asked in the first place. For the disabled in the real world, a disability is there to be lived with: it doesn't necessarily ruin a life, it doesn't make it easier. It's simply an unavoidable aspect of one's life. I'm not disabled myself (although I'm married to someone who is), but I imagine the constant claims by SF film and television that technology can "complete" people and "fix" them must get rather tiresome.

"Melora" was an episode that had languished in development for over a year by the time it finally reached the screen. The concept of a character who came from a low gravity environment was originally intended for the character of Jadzia Dax, but technical limitations led the producers to avoid using that concept for a regular member of the cast. You can tell from the credits that it was a difficult episode to write: plotted and originally scripted by Evan Carlos Somers, it was subsequently rewritten by Steven Baum, then by executive producer Michael Piller, and then again by James Crocker before it finally limped before the cameras.

This tortured development process shows. "Melora" is an awkward episode. The A-plot of Dr Bashir romancing and attempting to free Lt Melora from her wheelchair is relatively trite and cliched. The B-plot of an ex-convict threatening to murder Quark is tedious and dull. The climax, in which the two storylines connect and resolve at the same time, is considerably worse than the sum of its tedious parts. Guest star Daphne Ashbrook (later to play Dr Grace Holloway opposite Paul McGann in Doctor Who) does her best with the role of Melora, but it's an uphill challenge with the silly hair and bumpy head she's been given.

Born from an annoying premise, and executed in an overcooked "script-by-committee" fashion, "Melora" is the worst episode of Deep Space Nine's second season so far. That puts the season at five good episodes out of six, or 83%.
Posted by Grant at 12:01 PM