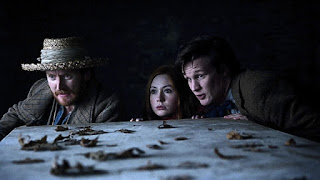 When Richard Curtis agreed to write an episode of Doctor Who, he did not hold back in unleashing his talents. "Vincent and the Doctor" is a remarkable hour of television, presenting the reality of depression to a family audience with enormous sensitivity and effectiveness. I rewatched the episode in July, and my review was the most popular post on The Angriest for the entire month.

In July 2017, across The Angriest, FictionMachine and FilmInk, I wrote one interview, four new film reviews, 20 reviews of older films, 7 TV episode reviews, as well as short reviews of 52 comic books. A full index of my July blog posts is included below.