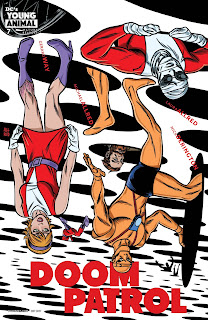 After a short hiatus, Gerard Way's loving and nostalgic tribute to Morrison-era Doom Patrol continues. This issue comes illustrated by Michael and Laura Allred who are, let's be honest, the best possible art team a Doom Patrol comic could have.

Niles Caulder is back, fully prepared to take control of the Doom Patrol once again - except his team are very reluctant to let him anywhere close to their lives and abilities ever again. This is a wonderful surreal and absurd issue that is largely self-contained - although obviously a familiarity with Caulder and the Doom Patrol's back story will add a huge amount of value here. If plaid-wearing invisible aliens from another dimension creating honey out of human bad ideas sounds like your kind of thing, then this is definitely the comic book of the week for you.

The Allreds' artwork is exactly what those familiar with their work might expect: beautifully proportioned work with a wonderful simplicity to the designs and the art. It's immediately engaging, bright and light-hearted. Sadly they're only here for the one issue, but it's an outstanding one. (5/5)

Under the cut: reviews of Action Comics, Batgirl and Detective Comics.

"Revenge" hits its climax, and it is something of a surprise: General Zod has forcibly taken over the gang of villains, while Superman and his friends are trapped inside the Phantom Zone. It's energetic, dramatic and well-paced. Long-term Superman fans will find the numerous classic characters a real treat. It also ties further into the long-running mystery that has been shadowing the Superman comics for a while now: who is the mysterious Mr Oz? Patch Zircher's artwork is relatively strong and enjoyable, with so many characters in play at once. Also impressive is Hi-Fi's colouring work on the Phantom Zone pages: all creepy and faded. It's hugely effective. (4/5)

Batgirl helps a young girl looking for a missing dog, and runs into Catwoman - who is hot on the trail of a missing cat. This one-shot storyline is very sweet, but it also staggers regularly into the territory of the grindingly twee. It is perhaps pitched for a younger audience than usual for Batgirl, which emphasises the problem. That said, Inaki Miranda's artwork and Eva de la Cruz's colours are very well done, and it is ultimately an entertaining little diversion. (3/5)

Azrael turns against his companions while Batman learns a forgotten moment from his past. This issue makes excellent use of small panels, giving the action a great sense of momentum throughout. It is amazing how much an innovative panel layout can invigorate a comic book: I have been relatively lukewarm on this current arc until this issue, which really knocks the ball out of the park. It also climaxes on one of the braver creative decisions Tynion has taken since writing this book. I will leave individual readers to find out what it is for now, but I'm both surprised and perversely delighted. (4/5)
Posted by Grant at 5:09 PM