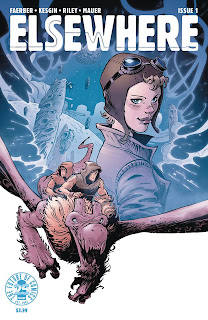 What if all of the famous people who vanished over history did not simply get murdered or die in obscurity somewhere, but actually found themselves transported to another universe? That is the basic premise of Elsewhere, a new fantasy series by writer Jay Faerber (Copperhead), artist Sumeyye Kesgin and publisher Image Comics.

To begin with, the series introduces us to Amelia Earhart, famous American long-distance pilot whose plane vanished over the Pacific Ocean in July 1937. After being rescued from a tree by a pair of goblin-like rebels on the run from their totalitarian government, she goes looking for her co-pilot Fred.

Kesgin's artwork has a quite traditional sort of look: clean, bold and immediately readable. Faerber's script is where the book staggers a little: it's relatively early, so the story could go either way, but there really is not a huge amount of plot here and nothing really leaps out to feel inventive or especially attention-grabbing. The basic premise is a cool one, but the execution really does let it down just a little. (3/5)

Under the cut: reviews of Robotech, Spider-Man and Swordquest.

I really can't go past a licensed comic if it's a property for which I retain a huge amount of affection. As a child I adored Robotech, a strange sort of portmanteau animated series that cobbled together three unrelated Japanese productions into one multi-generational saga. Seeing that Titan Comics had bought up a license and employed Brian Wood to write a new Robotech comic had me intrigued. Now that I've read it, I'm slightly perplexed. This is a retelling of the original series from episode 1, so effectively adapting Superdimensional Fortress Macross under its American title. It does not really vary that far from what is presented on television - so I find myself asking why Titan bother? The script is solid. The art is a little sketchy, and may take an issue or two to get used to it. I can't quite get my head around this one. (3/5)

The aftermath of the past few issues hits Spider-Man in a big way. After unleashing his powers for the first time in ages, Fabio goes missing. Miles recovers from his injuries. His parents meet again after separating. Ganke has an unpopular opinion to express. Really the whole issue is simply conversations and character development. Often the slow pace of this book frustrates me. This time around it really feels as if Bendis has earned the break from the action. It's important stuff for the long-running story and the characters. (4/5)

This comic just perplexes me. When Dynamite announced they'd secured the rights to produce comic books based on Atari videogames, I rolled my eyes about as hard as one can. Yet here we are, two issues into Swordquest, and it's one of the most surprisingly great comic books I have read all year. It's success stems from just how meta-textual it is: it isn't an adaptation of the fantasy videogame series, but rather a story set around the peculiar release and accompanying competition the game experienced back in the early 1980s. Throw in an ambiguous strand of magical realism, some top-notch artwork by the pseudonymous Ghostwriter X, and you have a really unexpected but delightful gem. The tragedy is that given its publisher and subject matter, the readers most likely to enjoy are probably the ones least likely to stumble across it. (4/5)
Posted by Grant at 4:52 PM