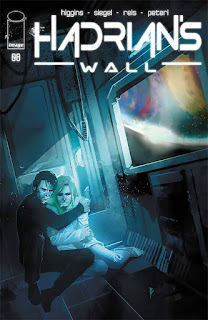 It started with a resentful drug-addicted police detective flying out to a distant spaceship to conduct a murder investigation. It ends, eight issues later, with two people huddled together with no oxygen or warmth left with which to survive. A hell of a lot happened in between.

Hadrian's Wall has been a tremendous miniseries. A smart murder-mystery in space that segued into a sort of siege thriller, with well-crafted characters and intelligence science fiction detail. Rod Reis was the icing on the cake, creating stunning painterly artwork that echoed some of the best production design of 1980s science fiction cinema. It is a blueprint for a cult film that never got made; who knows, with the series complete perhaps an enterprising studio will be tempted to take a chance on it.

A collection edition is coming soon. I really hope that it finds a strong readership on top of those who have already discovered it. This is the sort of SF work that deserves a big audience. (5/5)

Under the cut: reviews of Extremity, Giant Days and Seven to Eternity.

Jerome's vendetta runs wildly out of control, pitting him against his own children. With this issue Extremity hits the halfway mark, and it is a pretty apocalyptic place to be. This has always been a blunt, savage sort of action comic, and from the hugely impressive double splash page (and you know how much I hate those, so if I've praised it it must be great) to the inevitable and depressing conclusion it's a violent, bruising sort of a ride. Johnson's artwork is so perfect for the story he is telling. (5/5)

Daisy tries to set Ed up on a date with a fellow science fiction fan. Esther finds her position as the queen bee of her literature class under threat from a new arrival. It is the classroom scenes with Esther that delight the most this time around: immediately familiar to anybody who has undertaken an arts degree and nicely savage about its vagaries at the same time. Beyond that this is business as usual: nice characters, funny situations, and wonderfully appealing artwork and character designs. (4/5)

Guest artist James Harren's artwork seems a bit stronger this month; either that or I'm simply growing used to it. This is a slightly difficult issue, one that is almost certainly impenetrable to anybody who has not been reading the entire series so far. There are a lot of characters in play, with different cultures, agendas and magical powers, and sometimes it is a strain remembering who is who and where they were last issue. This is an impressive enough fantasy, but one I suspect is better suited to a collected edition. (3/5)
Posted by Grant at 4:57 PM