Doctor Who: "The Waking Ally" 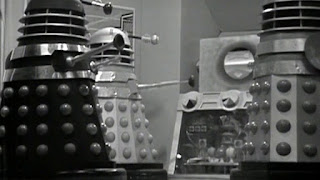 It is 19 December 1964, and time for the fifth part of the Doctor Who serial "The Dalek Invasion of Earth".

Ian (William Russell) and Larry (Graham Rigby) infiltrate the Dalek's mine in Bedfordshire. Barbara (Jacqueline Hill) and Jenny (Ann Davies) arrive there soon afterwards, after they are captured by the Daleks. Romance swells between Susan (Carole Ann Ford) and David (Peter Fraser) as they continue their trek out of London with the Doctor (William Hartnell).

Terry Nation certainly demonstrates how to plot a six-episode serial here. Every episode of "The Dalek Invasion of Earth" has pushed the plot forward one key step, which gives each instalment a sense of purpose and avoids the middle parts feeling like a bunch of characters running around in circles. The bleak, despairing tone of the earlier episodes continues here as well: not only is this one of the best Doctor Who serials so far it is also certainly the darkest in tone.

Thankfully Ian and Larry dispose of the Slyther very quickly, getting a particularly silly-looking rubber-suit monster out of the way. They then find themselves trapped in a mine cart heading down into the depths of the Dalek mine. In a nice piece of plotting their paths almost intersects with that of Barbara and Jenny, who have been betrayed by a pair of women with whom they sought shelter and are now part of the human slave group shifting rocks on the Daleks' behalf. Ian does get word to Barbara, although they are not personally reunited. With each character separated from the other, both get a fantastic showcase of their respective bravery, ingenuity and stubbornness. They really are both great characters.

Out on the road to Bedfordshire, David and Susan share their first kiss - one interrupted by the Doctor's return to their camp. In future years Doctor Who would be notorious for abruptly writing out companions without sufficient foreshadowing or motivation. It is interesting that in this, the first companion exit ever, things are being set up several episodes in advance. It is perhaps a little sad that in her final serial Susan is getting more development and character work than she has ever had. It feels a little bit like a case of 'too little, too late'.

The Daleks' ultimate goal is finally revealed: they plan to mine out the Earth's magnetic core and replace it with an engine, then they can drive the Earth around the universe like their own personal planet-sized spaceship. It is an utterly bonkers concept that makes terrible sense science-wise and is nowhere near as dramatic or effective as simply having them invade the Earth for slave labour or fresh territory. Terry Nation's B-movie leanings are in full force here, and after all of the serious drama, death and violence of the previous episodes it does not fit very comfortably into the story. It does not ruin the episode, but it does dent it just a little.

Eight episodes into Series 2, and once again all the episodes remain enjoyable. The quality ratio is stable at 100 per cent.
Posted by Grant at 12:39 PM