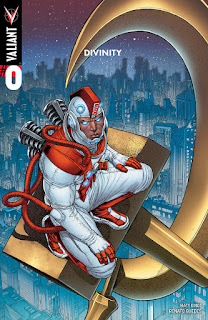 Abram is a cosmonaut who experienced something indescribable in deep space, and who has now returned to Earth as a seemingly all-powerful and inscrutable superhuman. The character starred in three exceptional miniseries over recent years, the most recent of which saw the entire world transformed into an alternate reality where the Soviet Union ruled the planet.

That crisis has been averted, and this special prologue issue sees Abram re-acquainting himself with the various Valiant heroes and finding his niche among them.

The writing is a little dry and narration-heavy, but then it is just a prologue issue and not the start of Divinity proper.

The real star here is Renato Guedes, whose beautiful painted panels and characters have such a wonderful richness and depth. It really is stunning artwork. This issue feels a little unnecessary - it teases rather than kicks off - but it's certainly great to look at. (4/5)

Under the cut: reviews of Batwoman, Descender, Kill the Minotaur, Poe Dameron, and Secret Weapons.

With issue #6, Batwoman takes a very surprising jump several years into the future, and to a Gotham City ruled by a tyrannical Batman with Batwoman leading a fight to take him down. It's quite a shock, and it's difficult to determine exactly what is going on yet (alternate future? weird foreshadowing?), but this issue is a hugely entertaining remix of a whole range of characters and situations. When the writing and artwork is this solid, I'm happy to simply run with it and see where it all goes. (4/5)

There is something hugely effective about the manner in which Descender slowly put all of its chess pieces in the board, and is now playing them all out in one apocalyptic, climactic story arc. This is an issue with high stakes, serious drama, character death and some of the very best artwork I have seen Dustin Nguyen do. His work on Descender has a wonderful and very distinctive aesthetic, and as I've mentioned in this column before it runs counter to the content: soft, human and sketchy when the story is so heavily dominated by hard technology. It's great. (4/5)

As this adaptation of the Theseus and the Minotaur legend continues, it is diverging more and more from the traditional story. That's a good thing: it's making this a quite unexpected and intriguing dark fantasy. It does still struggle a little, however, since Theseus is not a particularly likeable character here. It is occasionally a struggle to care too much about what is happening to him. Fortunately Princess Ariadne seems a lot more engaging. (3/5)

Poe and Snap continue hunting down the traitorous Oddy Muva, while Jess, Kare and journalist Suralinda Javos head off to record evidence of First Order atrocities. It's solid stuff, and broadly entertaining while still feeling a bit generic. A highlight is surprisingly Oddy's conversation with Agent Terex, suggesting a bit development in that corner of the book any issue now. With The Last Jedi dropping in cinemas in a few months, it will be interesting to see how this book adapts to new material. (3/5)

Livewire continues to defend three psychics with minor powers from being killed by the mysterious super-warrior Rex-O. This continues to be a wonderful miniseries. The characters are charming, as are their limited power sets. Allen and Martin's artwork is really unlike typical superhero fare, and is both well coloured and very effectively laid out. This Valiant model of producing lots of relatively contained four-issue miniseries really works. This is a fantastic read. (5/5)
Posted by Grant at 11:51 PM