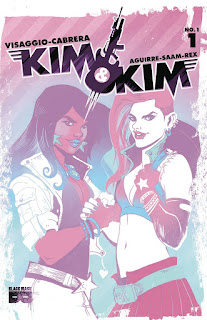 Black Mask Studios are really going all out in launching new books at the moment. Their latest new title is Kim & Kim, from Mags Visaggio and Eva Cabrera. It follows two bounty hunters, Kimiko Quatro and Kimber Fantzler, as they hunt down criminals on the planet Vessus Secundo. It's a bizarre coincidence to see this book get released this of all weeks, since its release coincides with that of the very similar Bounty over at Dark Horse Comics.

Of the two, I think I prefer Kim & Kim. It has a much breezier tone to it, and a more relaxed kind of humour. The characters immediately seem more likeable. Visaggio's script also throws around a lot of background detail, that helps to quickly paint together an expansive fictional universe in which the story can take place.

That said, Eva Cabrera's artwork feels relatively inexperienced and below par. It is a similar problem I found with Black Mask's other recent launch, Jade Street Protection Services, but in this case the drawbacks of the art are well compensated by Claudia Aguirre's rich colours. If you ever wanted a good example of how strong colours can lift artwork, Kim & Kim seems like a great example. This is a very promising first issue, and I am keen to see more. (4/5)

Under the cut: reviews of The Fuse, Giant Days, Revival, The Sheriff of Babylon and Silver Surfer.

The fourth story arc of The Fuse kicks off here, so if you're interested in reading one of the best science fiction comics on the market this is a pretty good month in which to start. In case you are new: two cops run homicide in a massive space station orbiting the Earth. One of them, Klem, has decided to retire to Mars. The other, Ralph, has been harbouring a secret since he arrived on the Fuse, and has been hunting down his sister within the militant "Fuse Liberation Front". Now a fresh murder case is going to get a little too close to Ralph's secret activities. This is, as always, an excellently written police procedural backed up with some great science fiction detail. Justin Greenwood's artwork demonstrates how you can tell a serious, grounded story without resorting to realistic art. I flat-out adore this comic. (5/5)

I really do adore Giant Days. It is a wonderfully funny comic about three English university students having the sorts of problems that students generally do. To an extent it works a bit like a soap opera, given the cast's various love lives, but the dialogue is wonderful and Max Sarin and Liz Fleming's artwork is lively with a great tone. John Allison is a wonderfully talented writer - I think a lot more readers should be aware of his stuff. (4/5)

After several years of piling conflict upon conflict, and twist upon twist, the whole fabric of Revival is finally tumbling down towards its apocalyptic finale. The military has lost control. The quarantine at the reviver's camp is broken. People are panicking. Innocent people are getting slaughtered by trigger-happy soldiers. While the immediate lead-up to this climax has been a little uneven, it has kept its ultimate focus on the two sisters Martha and Dana Cypress - and that's been a really good thing. I worry for how their story might end. (4/5)

The Sheriff of Babylon #8

It is a mark of both Tom King's excellent writing and Mitch Gerads excellent artwork that this issue can feature four pages of a woman talking on a mobile phone and be the most gripping and intelligently presented comic book of the week. The story is great, with an unexpected shift in its direction from the start of the issue to the end, and is still finds room for character development. This is a bluntly realistic series, and a rather bleak one too, but it stands out as the best work Vertigo has published in years. (5/5)

Any momentum this book used to have seems shot to hell for me. I loved Silver Surfer's relaunch under Slott and Allred, but then things seemed to run off-course when Marvel's Secret Wars event overwhelmed the book. A new volume sort of staggered into existence, followed by a very hasty climax and now a weird sort of epilogue here. A key part of this issue involves a hooded figure having replaced the all-powerful Watcher character - the story acts as if I should know what is going on, but I do not. This is where I usually assume it's something from an event that Marvel just assumes I have read. Basically this book is a bit of a mess: there are nice moments and details, but the story momentum is gone and I don't see it coming back soon. (2/5)
Posted by Grant at 11:45 AM