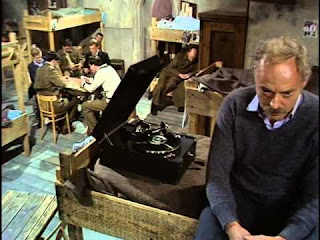 It is 21 December 1972, and time for another episode of Colditz.

Wing Commander Marsh (Michael Bryant) develops an audacious plan to escape Colditz: he will fake mental illness, forcing the Germans to repatriate him back to Britain. It is plan known only to a few key British officers, and one that will take months to achieve. As his plan slowly comes to fruition, Marsh begins to anger and upset the guards, the Kommandant and even his own unwitting fellow officers.

"Tweedledum" is generally held up as the very best episode Colditz had to offer. It was widely acclaimed upon release, and Michael Bryant's guest performance as Commander Marsh is so accomplished it earned him a British Academy Award nomination (he lost to Anthony Hopkins for War and Peace). It has been nearly 44 years since the episode was first broadcast, and despite its age it remains staggeringly effective. This is an episode I would strongly recommend watching before reading any reviews about it.

The task that Marsh sets himself is jaw-dropping. He is required to sustain the appearance of schizophrenia for several months, without revealing the truth to anybody but a small core of allies: the British medical officer (a typically dry Geoffrey Palmer), Grant (Edward Hardwicke), Carter (David McCallum), and Colonel Preston (Jack Hedley). He is required to fool the German guards, the German medical officer, and the Kommandant (Bernard Hepton) until they agree to bring in independent psychologists from Switzerland. Then he needs to fool the psychologists. His increasingly erratic and paranoid behaviour puts him against the unsuspecting bulk of British officers, and makes him the target of one German guard in particular: Corporal Hartwig (Bernard Kay), whose experience with a genuinely ill brother has his convinced Marsh is faking it.

The exceptional strength of "Tweedledum" is that while Marsh fools the entire prison camp, he also begins to fool us. His masquerade simply becomes too convincing. Doubt sets in that perhaps he has sunk too far into his performance, and that he has actually gone insane. By the episode's conclusion these fears turn out to be well-founded. While he is repatriated back to Britain, it is directly into a hospital where he is not expected to ever recover. Colonel Preston coldly orders that no such escape attempt be made again.

The most remarkable aspect of this story is that it is impossible to determine when Marsh stops faking mental illness and begins to suffer from it. The progression is so convincing and so completely ambiguous that it simply cannot be worked out. After one violent outburst Marsh gives a secret knowing wink to the medical officer - but does that mean he was entirely faking it then, or was he already halfway towards losing his mind? Did his wink even mean what we think it does? Bryant's performance is utterly faultless, and crosses between being funny, disturbing and absolutely heartbreaking.

A lot of critical focus on "Tweedledum" understandably centres on Bryant's performance. It is well worth also considering Bernard Kay's supporting turn as Corporal Hartwig. His brother is in an institution due to schizophrenia, and as a result he is ordered by Hauptmann Ulmann (Hans Meyer) to shadow Marsh and observe his actions. At first Hartwig acts despicably towards Marsh, because he believes the insanity to be an act. He is gradually convinced, however, and eventually forms a genuinely kind and sweet bond with him. At first it seems as if Hartwig has been fooled by a clever performance, but in truth he is the first to actually recognise Marsh has genuinely lost his mind. A climactic moment sees Marsh break down in a sobbing fit: Hartwig is the only man to step forward and comfort him. This deliberate strategy of making the German officers three-dimensional and largely sympathetic characters remains one of the real strengths of Colditz. These men are generally not Nazis. They are simply military officers given a task by their superiors: they have independent minds, genuine emotions and real depth. It remains a very bold creative move.

The hype is correct: "Tweedledum" is an exceptional hour of television. It benefits from an outstanding script by John Brason (who also wrote the excellent "The Traitor"), strong direction by Michael Ferguson, and core guest performances by Michael Bryant and Bernard Kay. It is not just the best episode of Colditz so far, it is absolutely one of the finest hours of BBC drama I have ever seen.
Posted by Grant at 5:53 PM