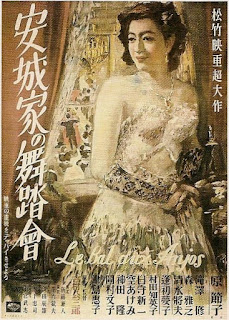 In the aftermath of the Pacific War, the aristocratic Ando family has fallen on hard times. The proud father Tadahiko (Osamu Takizawa) is about to lose their mansion to a wealthy black marketeer. His lothario son Masahiko (Masayuki Mori) has seduced a family maid while secretly pursuing marriage with the marketeer's daughter Yoko (Keiko Tsushima). Daughter Akiko (Yumeko Aizome) spurned the advances of the family's chauffeur, who has now returned to the scene as an independently wealthy businessman. It is only Tadahiko's other daughter, the bright and thoughtful Atsuko (Setsuko Hara), who holds onto any kind of hope for the future. Together the family agree to host one final society ball, to commemorate and mourn the noble life to which they have all been accustomed.

One of the special programs of this year's Melbourne International Film Festival is a retrospective on the legendary Japanese actor Setsuko Hara. Shortly after the end of the war she starred in Akira Kurosawa's drama No Regrets for Our Youth. From there she was quickly cast in Keisuke Kinoshita's Here's to the Girls, as well as this film: Kimisaburo Yoshimura's A Ball at the Anjo House. In all three she came to typify the image of the 'new Japanese woman': one looking to the future more than dwelling on the past, and accepting Japan's new position in the second half of the 20th century.

Hara would subsequently form a long working relationship with Yasujiro Ozu, including his enormously acclaimed film Tokyo Story. So close was their professional partnership that when Ozu died in 1963 Hara quit acting altogether. She died a little under a year ago, at the age of 95. I suspect the timing of MIFF's retrospective is deliberate.

In every film of Hara's that I have seen, she positively pops off the screen. There are certain actors that are gifted not only with talent but presence: Hara is absolutely one of them. She commands attention. She constantly delivers thoughtful, delicately emotive performances. That is absolutely the case here: as Atsuko's family stumbles and falls apart around her, she is the glue that forcibly holds them all together. Of the four of them she is the only one with hopes for the future.

Osamu Takizawa is dignified and gently tragic as her father Tadahiko, who has lost not only money but respect. He was raised with an attitude of superiority and nobility, and he now faces losing everything to a criminal who profited while Tadahiko fought in the Imperial Army. His performance is littered with quiet moments and pained expressions. It all comes to a head at the film's quiet, small-scale climax, when he is forced to choose between letting go of his aristocratic heritage or putting an end to his life altogether. Critically, in a time when suicide was still widely seen in Japan as a deeply honourable and often sensible way to end one's life, Atsuko fights to convince him to live on instead.

This is a deeply symbolic film. At one critical juncture the former chauffeur Yoshida (Taiji Tonoyama) gets drunk and rails against Akiko for spurning him. He stumbles out of the house, part of an angry rising middle class, and knocks over a samurai suit of armour in the front hallway: the new world has brought the old one crashing down in pieces.

Tonally the film is an unashamed melodrama, and some of its more heightened moments threaten to elicit more laughs than sympathy, but it has a solid emotional core and is both directed and performed with great integrity. The film's screenplay was written by Kaneto Shindo, who would go on to become an accomplished and hugely talented director himself. It is a very well structured script, which the film essentially taking place over a single night from the early evening to the following dawn. It brilliantly juggles the struggles and misfortunes of each individual family member, as they interact and overlap. When the film's climax comes, with Atsuko gently dancing with her father in an empty hall, it is emotionally powerful and well-earned. A Ball at the Anjo House was named Best Film in the prestigious Japanese magazine Kinema Jumpo. It was an accolade that seems well deserved.
Posted by Grant at 10:17 PM