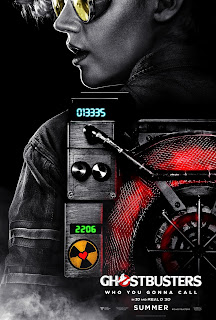 I do not actually remember the last time a Hollywood Summer blockbuster has reached cinema with such a ridiculous storm of... I'm going to be honest, I don't have a suitable word to describe it. It isn't 'controversy', because that immediately suggests there is something controversial about Paul Feig's Ghostbusters remake. I suppose the best word is simply 'noise': a small, overly active minority of angry Ghostbusters enthusiasts took umbrage with the idea of remaking the film, of remaking it instead of making a second sequel to Ivan Reitman's 1984 original, and of remaking it with a gender-flipped cast of women rather than men. Some fans seemed to side with one or the other of those objections, and the noisiest appeared to side with all three, but the total response has been weirdly farcical and fairly repellent to watch. Groups of angry people seem to have conspired to hamstring the movie wherever possible, including flooding the film's IMDB listing with negative reviews and ratings prior to anyone having actually seen the film.

The more reasonable anti-remake fans seem as if they need a hug and a quiet reality check: this is just a movie, it doesn't ultimately matter. The most aggressively sexist ones - many of whom seem to have attitudes approaching genuine misogyny - seem to be demanding a fierce punch to the face, or better yet to just be completely ignored for the trolls and children that they are. If their goal was to destroy Ghostbusters I feel pretty safe in claiming their attempt has failed: few tentpoles this year have been as actively and consistently profiled and discussed. I am not sure if a marked publicity boost was what the so-called "Ghost-bros" had in mind, but it is effectively all that they achieved.

After all of the shouting, the sabotage attempts, and the widespread angst and anticipation, Ghostbusters turns out to be pretty great. It is not as good as its namesake, but that is not a surprise. What it is is a very funny, rather stylish variation on a 1980s classic, one that holds up very well by comparison and stands by itself as a tremendously enjoyable blend of horror and comedy.

Dr Erin Gilbert (Kristen Wiig) is a Columbia University academic days away from securing tenure when her career is torpedoed by the re-publication of an old book co-written with her former partner Dr Abby Yates (Melissa McCarthy). That book's subject matter - the science of ghosts and the supernatural - lead them to reunite to investigate an apparent haunting in a New York heritage building. Along with the eccentric engineer Dr Jillian Holtzmann (Kate McKinnon) and former subway worker Patty Tolan (Leslie Jones), they establish a ghost-hunting business just as the city becomes overrun by spectral apparitions.

This new film is a much more overt comedy than its namesake, and that works to its favour. It helps make it distinctly difference from the original Ghostbusters and allows it to take some steps towards establishing its own identity. Kristen Wiig and Melissa McCarthy play their parts relatively straight, and that allows room for Kate McKinnon to steal many scenes as the wildly off-kilter Holtzmann. The character is already a big hit with audiences, and McKinnon deserves all the praise she gets. While she is already a noted TV comedy star via Saturday Night Live, I think Ghostbusters is going to launch her film career in an enormous way. Leslie Jones feels a bit more awkward. While her performance is sensational, she is unable to quite paper over the problem that Patty is a fairly weak stereotype of a sassy uneducated black woman. It is a character audiences have seen on screen for decades, and it is one that is well overdue for retiring. It does not derail the film, and Jones really is very funny, but it is a defect worth highlighting.

Chris Hemsworth is brilliant as Kevin, the team's idiot Australian secretary. It's a funny and knowing element to make the film's only major male character both a bit stupid and pretty much eye candy. It is a nice little inversion of the traditional Hollywood trope. Other scenes throughout the film gently poke fun at the ridiculous online reaction to the female cast, which I appreciated a great deal.

Something that is particularly great about this cast and script is that, despite the all-female leads, it is not 'the female Ghostbusters'. Erin's crush on Kevin aside, they are scientists first and women second. You could do a fairly quick swap of the genders and essentially keep the same plot. At the same time the character's reactions to events feel authentic and distinct from those expressed by the 1984 cast. Based on these five leads alone I could watch Ghostbusters sequels until the cows came home. They are without exception huge fun to watch.

The film's storyline is solid, if a little wobbly in its third act. In many ways its problems are endemic of contemporary Hollywood cinema. It's very glossy and attractive to look at, and moment to moment it is very entertaining, but the plot itself feels a little undercooked in places. As with the character of Patty, it is not a major flaw - but it is a flaw.

If there is a huge flaw in the film, it is that it feels a little too respectful of the source film in places. Most of the stars of the original Ghostbusters make cameos, which largely feel unnecessary. Lines of dialogue and visual effect sequences deliberately echo the original, as well as certain camera angles. I suspect few of the references will disrupt the experience for new viewers that never saw the 1984 film, but as someone who has seen that 1984 version many times it did occasionally throw me out of the story for a moment.

This is a slightly imperfect film, but a tremendously enjoyable one. The visual effects are wonderful. The pace is brisk. The cast are exceptional. The jokes are hilarious. While this film does not match the quality of the original Ghostbusters, it comes a fairly close second - and absolutely leapfrogs the troubled Ghostbusters II. It is one of the most fun two hours I have had in a cinema in a long time.
Posted by Grant at 11:16 PM