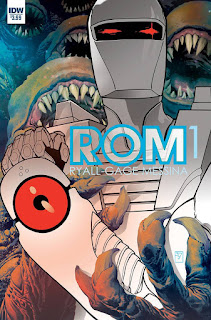 ROM was an electronic robot toy, released by board game manufacturer Parker Bros in an attempted expansion to produce action figures. To promote the toy the company partnered with Marvel Comics to create a tie-in comic. ROM #1 was published in 1979 with a script by Bill Mantlo and art by Sal Buscema. The toy was a commercial flop. The comic lasted for 79 issues, including four extra-length annuals, and finally wrapped up in 1986.

The weird thing about the ROM comic book was that for a toy promotion it was really good. Mantlo incorporated ROM, the cyborg alien with a penchant for killing interstellar Dire Wraiths, into the Marvel Universe itself. Characters such as the Hulk, Sub-Mariner and the X-Men would guest star in issues of ROM. The character developed a firm cult following that continued to praise the character long after the book had wrapped up and the character rights had reverted to Parker Bros. Now, 30 years after Marvel called it quits, IDW has licensed the property from Hasbro (who bought out Parker Bros some years back) and is launching an all-new monthly series of ROM.

This first issue is clearly produced with an enormous amount of love for the original comic. It follows ROM's arrival on Earth, and as with the Marvel edition he finds the Earth overrun with the shape-shifting diabolical Dire Wraiths. That said, this is an issue that definitely plays things safe. It tells an entertaining story but nothing more. It does not push any boundaries, it does not try anything innovative and new. David Messina and Michelle Pasta's artwork is solid but conventional. Any readers looking for a straightforward science fiction story about an alien coming to Earth and meeting a human woman might find this satisfying. Long-term fans of the character will get a kick out of seeing his origin remixed a little.

Under the cut: a slightly more spoilerific comment on ROM, plus reviews of The Autumnlands, Doctor Who, 4001 AD, and Mechanism.

Pretty much everybody will be surprised when - in a last-page reveal - the cast of G.I. Joe turn up. Yes, this book forms part of a new united universe of IDW titles, all based on toy properties including Transformers, G.I. Joe, Micronauts and MASK. It's an interesting idea, and certainly it will play very successfully on nostalgic thirtysomethings, but I am withholding judgement on how it all works until I get to read a few more issues. This is a solid beginning, but I really want it to push one or two envelopes at the same time. (3/5)

Rusty and Learoyd's adventure on the mountain ends in a sudden and tragic fashion, while the history of the world slowly becomes a little clearer. It is good to see this comic back on a monthly schedule; its irregular pace at the beginning of the year was beginning to hurt the story's momentum. There is a really lovely sort of storybook vibe to this comic: each issues begins with a page from some old-fashioned novel, and Benjamin Dewey's art really feels a lot closer to that kind of nostalgic children's book than typical American comic book artwork. (4/5)

Here we are at the 11th issue of a comic book about the 11th Doctor, and the man himself is nowhere to be seen. Instead his companion Alice has stumbled back into the Time War for an adventure with the War Doctor (played in the 50th anniversary special by John Hurt). Despite his brief screen time I am an enormous fan of the War Doctor, and it fabulous to see his brief tenure expanded upon here. Fans who like a spin-off comic like this to play it safe may find this issue a little too challenging, featuring as it does insane Dalek scientists of a type we've never encountered before, as well as an all-new and entirely unexpected incarnation of the Master. Si Spurrier writes a wonderfully original script, and I.N.J. Culbard provides highly distinctive and visually arresting artwork. This is one of the best issues of Doctor Who that Titan Comics has published. (5/5)

Rai returns to New Japan to overthrow Father, aided by his companions Lemur and the Eternal Warrior. A miniseries like this is an excuse for large-scale 'widescreen' action, and in this regard 4001 AD does not disappoint. This is an epic, apocalyptic story, with mass casualties and conflicts on a huge scale. The real star continues to be Clayton Crain, whose French-style Metal Hurlant imagery pops off the page. I really hope that, like their earlier hit miniseries Divinity, Valiant give this series the over-sized hardcover treatment. It deserves it. (5/5)

In the future, the Earth has been overrun by alien invaders known as "geckos". A pair of human officers get paired with a sentient android while they undertake their patrol - coming across a scavenger right where he isn't supposed to be. This post-apocalyptic sci-fi comic does not have the best of scripts: the plot is solid but the dialogue rings a little stereotypical. The art, however, is top notch. While Ienco relies pretty heavily on a wide four-panel layout, the decompression of the story is compensated by the beautiful widescreen cinematic feel of it. The luminous colouring is particularly eye-catching. So not the most dramatic of comics this week, but certainly one of the prettiest. (3/5)
Posted by Grant at 7:26 AM