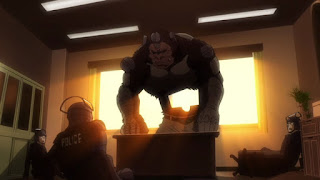 It is 21 November 2013, and time for another episode of Samurai Flamenco.

So Samurai Flamenco follows the naive male model Masayoshi Hazama, who has decided to assume the tokusatsu (Power Rangers and their ilk) persona of Samurai Flamenco, and to head out onto the streets of Tokyo to fight crime. Over the first six episodes his crusade has escalated somewhat: a local pop idol and her back-up singers have assembled costumes of their own to become the Flamenco Girls. A TV network put a reward out for anyone able to unmask Samurai Flamenco. A crazy inventor fitted Masayoshi out with weapons and gadgets derived from office supplies.

In this seventh episode Masayoshi discovers that his parents did not simply die in an accident when he was a child, but were murdered in a robbery gone wrong. He also discovers that his grandfather, who created and wrote the Samurai Flamenco character, wrote that tragic origin into his television script. Then a police raid on a drug laboratory goes haywire as one of the drug dealers mutates into a giant homicidal cyborg gorilla with a guillotine in its chest.

Okay, it is probably worth backing up at this point. Since the first episode Samurai Flamenco has been a fairly ridiculous comedy, and a lot of its humour has come from juxtaposing the tokusatsu-inspired lunacy of the lead character with the banal, everyday reality in which he lives. He might want to be a vigilante fighting murderers and organised criminals, but he has more often fought jaywalkers, sex pests and litterers. So when a man transforms into an angry talking gorilla and starts decapitating police officers with the blade in its chest, it is fair to say a pretty massive shift in plot and tone has just occurred.

I honestly do not know what to make of it. It is the anime equivalent of making an episode of Seinfeld where a spaceship suddenly turns up, or an episode of The West Wing where it is revealed the Oval Office is infested with ghosts. It is difficult to describe it as a twist, but twists generally make some kind of sense. This is just a completely bizarre right turn, one that vigorously runs against what appeared to be the whole premise of the show. I was enjoying Samurai Flamenco because it was such a funny riff on superhero narratives - that riff does not work it becomes one of those narratives itself.

There also seems to be a gradual decrease in the animation budget on the series. The movements are becoming a little stiff, and increasingly limited. Combined with the bizarre change in direction it makes me wonder if something was going on behind the scenes, as if the ratings of episode 1 were so low it provoked the TV network to cut the budget and demand story changes as soon as practicable.

A lot of how I feel about Samurai Flamenco is going to hinge on how I enjoy the next episode. As for this one, the pace was a bit slow and the climax just wildly out of place. It leaves the series with four good episodes out of seven, and a quality ratio of 57 per cent.
Posted by Grant at 9:13 AM