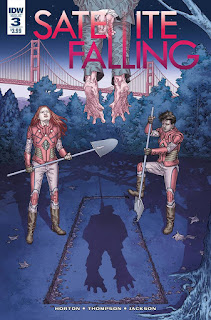 As a pretty keen fan of science fiction, I have been really happy in recent years to see American comic books really embrace the genre in a manner I haven't seen in years. Saga is one of the biggest-selling comics on the market. The Fuse has been running strong. Even DC and Marvel have been contributing with the likes of Guardians of the Galaxy and The Omega Men.

One of the books that runs the risk of getting overlooked is Steven Horton and Stephen Thompson's Satellite Falling. It is set on a space station packed with alien refugees, as well as one human who does not want to remain on her own world after it cruelly blockaded and imprisoned the aliens as they arrived. In issue #3 Lilly (that one human) has learned her presumed-dead ex-lover appears to be running a crime syndicate. While the police undertake their own investigation, Lilly puts together a team to fly out into space and take down her former girlfriend herself.

This is a really strong pulp science fiction comic that feels as if it is getting better with every issue. The art in this particular instalment really stands out, with Stephen Thompson taking the opportunity to design a stunning range of aliens and high-technology environments. The script also opens with a much-needed flashback to start fleshing out the background of this story. It is not necessarily doing anything that has not been done before, but Satellite Falling is doing it very, very well. (5/5)

Under the cut: reviews of Archangel, Dungeons & Dragons and Powerpuff Girls.

William Gibson's time-travelling story continues. For a first-ever run at scripting a comic book, Gibson has done a sterling job. Butch Guice's artwork keeps everything grounded and realistic. Unsurprisingly for one of the world's best science fiction writers, there are a lot of great science fiction ideas in here. It is not as simple as a time travel adventure about a man from the future trying to change the course of history: we are the alternative history. We only exist because of events in this comic. It is an intelligent twist that helps to make Archangel a really distinctive and smart book. (5/5)

Dungeons & Dragons: Shadow of the Vampire #3

Jim Zub's sense of humour is what is keeping this RPG spin-off afloat. Without its tongue-in-cheek approach this would be a dreadfully stereotypical and dull affair, but with the jokes coming fairly thick and fast it becomes something of a knowing romp. It should prove quite a pleasing diversion for fans of Dungeons & Dragons' continuity, focusing as it does on the popular Ravenloft and Baldur's Gate settings. For readers outside of the core fanbase it is a little bit less interesting I suspect, but anybody craving a simple character-based fantasy adventure might find this to their tastes. (3/5)

These days, if there is an old nostalgic TV show or cartoon, someone in America is going to revive it as a comic book. The latest is Powerpuff Girls, no stranger to comic book adaptations but receiving a whole new series thanks to writers Hayley Mancini and Jake Goldman, artist Derek Charm, and publisher IDW. If you are feeling nostalgic for the original animated series - or indeed the upcoming new one - this will likely satisfy your cravings. If you're looking for an entertaining all-ages title to share with the kids, it's pretty much pitch-perfect. Bold, clean artwork and large panels make it a very easy read, and a great gateway drug for new young readers. (3/5)
Posted by Grant at 7:14 AM