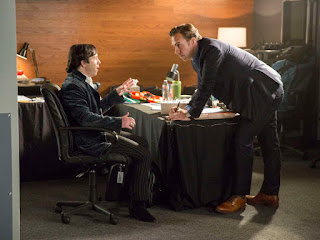 The Staten-House Band returns to their home town of Denver, Colorado, for two special shows. Immediate complications ensue: Janine, the subject of Christopher House's tortured affections and one of the band's most famous songs, turns up to watch the concert. Kelly-Ann (Imogen Poots) struggles with the rumour that she and Reg (Rafe Spall) are a romantic item. Shelli (Carla Gugino) is desperate for sex with no one to have it with. Bill (Luke Wilson) is inspired to finally make amends to his ex-wife Lorraine.

This episode brings big changes for the lives of several regular characters, but because these characters have been developed so stereotypically and thinly it is difficult to actually feel any sort of emotional effect. What's more, the time spent pushing those particular hamster wheels in circles prevents the episode from spending more time on the characters that do work.

One of these is Staten-House enthusiast Mike Finger (Ely Henry). As part of a small running plotline, Reg has been attempting to track down lost and bootleg recordings of the band. Finger runs the band's most popular fan website, and so seems the best opportunity for Reg to get what he needs. As the episode goes on Finger becomes a genuine surprise. Given how fiercely an earlier episode had demonised music critics, I was fully expecting the series to give a similarly unpleasant treatment to the hardcore fans. Instead Finger gets to explain to Kelly-Ann how important the hardcore fans are to the band itself, and what a contribution they all make. He is a weird character for sure, and as with most of the series' characters he's a little exaggerated, but I was surprised at how gently he gets treated.

Even more striking is Janine Beckwith (Joy Williams). She was the inspiration for the band's famous song "Janine", and the very mention that she is coming to the show causes Christopher to freak out a little. When she finally arrives and meets Reg - this seems to be a very Reg-centric episode - she is surprisingly normal and mature. Reg takes a shine to her, and invites her back for the second show. It's a fairly interesting progression: given how much Christopher House continues to obsess over Janine, seeing her start a relationship with the widely disliked tour manager can only create trouble. It really is the first romantic pairing in this series that has interested me.

I am certainly not interested in Bill and Sherri, who finally have sex this week. In a better series it would be a significant moment, instead the most significant emotion it creates is the relief that the show doesn't have to bother with the tedious "will they, won't they" routine. I really do feel sorry for Luke Wilson and Carla Gugino, two great actors stuck with really ordinary parts.

I am also disinterested in the whole painful car-crash romance between Kelly-Ann and Reg. The series has driven Kelly-Ann to be moody and miserable for enough episodes in a row that I am failing to care about her any more. As for Reg, the scripts regularly portray him as unlikeable, and that makes me disinterested in his character even in the most general terms. There is a vacuum in this series where its heart should be.

There are highlights: I am really enjoying the series' constantly changing support bands, as it is giving some great real-life musicians the chance to showcase their sound to a TV audience. This week it is indie electro group Lucius, whose performance of their song "Born Again Teen" is utterly brilliant. I am tracking down the CD already. Another great element is the show-within-a-show Dead Sex, a cheesy zombie TV drama that seemingly everybody on the tour is religiously watching. It turns out it stars David Spade, which is a flat-out hilarious concept and results in a brilliant cameo.

There's also a really weird bit. There was a reference in last week's episode to Taylor Swift taking her concert tour into space, and I figured it was an odd joke that went flat or something. It is mentioned again this week, however, and it seems pretty clear that it is not some strange reference or in-joke: in the world of Roadies, Taylor Swift has just come home from Earth's orbit. This one's so weird I honestly don't know how I am supposed to respond.

There is actually some worthwhile material here - buried under the standard stereotypical smug rubbish sure, but there nonetheless. It gives me hope this series might eventually get its act together, assuming it manages to last long enough.
Posted by Grant at 10:23 PM