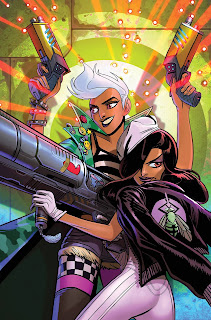 Kurtis Weibe scored a major cult hit with his fantasy comedy series Rat Queens, which followed a group of archetypal Dungeons & Dragons style adventurers - all women - fighting monsters, getting drunk and generally behaving very badly. That book seems to have foundered under something of a cloud, but Weibe is keeping busy. This week sees the release of Bounty, an all-new 10-part miniseries from Dark Horse. Weibe is writing, with Mindy Lee providing the art.

The book follows wanted criminals and sisters Nina and Georgie who, after a mission goes wrong, take on new identities and become intergalactic bounty hunters themselves. It is a jump in genre for Weibe from fantasy to science fiction, but it's a jump he had made before and in many respect it acts as a sister title to Rat Queens relocated to a different genre. The tone is relatively similar, but the characters and the background detail are completely different.

Mindy Lee's artwork reminds me quite a bit of Annie Wu. It has that same spiky, exaggerated energu to it, and it matches Weibe's script very well. This is a violent book, but not to Rat Queen's extent, but it is also a genuinely funny book. If it keeps up its current quality, I can see it giving Rat Queens a run for its money in the cult comic book stakes. (4/5)

Under the cut: reviews of 4001 AD: Shadowman, Doctor Who: Supremacy of the Cybermen and Poe Dameron.

Like all good comic book publishers, Valiant cannot let an event miniseries get away without adding a few spin-offs. Thankfully, rather than interrupt their regular titles Valiant do things like this: a special one-shot revealing the Shadowman of the year 4001. It is set in two cities, one populated by the living and another by the dead. Every year a group of young people are sacrificed to the city of the dead - only this year three youths have been assigned to fight back. There's some great stuff in here, with strong and dynamic artwork, but like a lot of these one-shots it's hammered by only being one issue. When the end does come it is abrupt and frustratingly open-ended. It's a fun comic, but its promise ultimately goes unrealised. (3/5)

Doctor Who: Supremacy of the Cybermen #1

After the success of last year's big crossover miniseries, Titan are back with a follow-up. This time around they are celebrating the 50th anniversary of the Cybermen with the five-part storyline "Supremacy of the Cybermen". This busy first issue is practically a dictionary definition of fanwank, drawing in the Ninth through Twelfth Doctors, Gallifrey, Karn, Sontarans, dinosaurs, and Silurians. To be honest it is enough of a mess that I doubt Mann and Scott will manage to rein it all in by the end of the fifth issue, but I'm happy to wait and see. The artwork is a little underwhelming, but the colouring makes up for much of its shortfalls. (3/5)

Truth be told I was about to give up on Poe Dameron. This Force Awakens prequel comic seemed to lack the energy and originality of Darth Vader, and after its initial three-issue arc I was ready to put it down and move on. I am glad I gave it one more chance. This issue feels like somebody put a bomb under Charles Soule's script. It is more interesting - Poe heads to talk to a Hutt inside a maximum security prison - and it features a lot more character development for his squadron of fighter pilots. The setting is clever, and Phil Noto illustrates it really well. Thankfully there are no X-Wing versus TIE dogfights in this issue, because those spaceship-based scenes are where Noto does not seem to manage too well. This is a smart, funny, well-plotted tie-in comic - Star Wars fans will find an awful lot to like. (4/5)
Posted by Grant at 7:07 AM