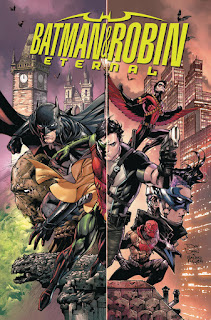 I'm an enormously keen fan of Batman, and one of the main reasons I like reading Batman comics is not just the lead but also his supporting cast. There is literally no other American superhero with as rich and entertaining a chorus of villains, sidekicks and associates. X-Men fans regularly try to claim their weird super-powered soap opera is as expansive, but it definitely isn't as good. Spider-Man gets quite close - certainly he seems to have the second-largest array of super-villains to overcome - but he still falls a bit short of the mark.

Batman and Robin Eternal seems purpose-built for my interests. It's a new 26-issue weekly comic book that launched last Wednesday. At present in the DC Universe Bruce Wayne is an amnesiac. Former police commissioner Jim Gordon is defending Gotham from inside a robot suit. All of Batman's sidekicks and companions are kind of at a loss for what to do. Into this void comes a new conspiracy, as a mysterious villain named "Mother" targets several of Batman's former partners: Dick Grayson, Jason Todd, Tim Drake, Harper Row and Cassandra Cain (yes, she's finally back). This is basically Batman without Batman in it - although Jim Gordon does get a brief look-in.

This does everything a first issue should do: introduce the main characters, set up an ongoing mystery, and throw in a bit of entertaining action. Now DC has a patchy track record with weekly series. Only one - 52 - has ever been a bona-fide masterpiece, and more than a few have become tedious in the extreme. Fingers crossed that this one maintains its focus and momentum right through the next six months. (5/5)

Under the cut: reviews of Copperhead, Doctor Who and The Omega Men.

Copperhead's second story arc reaches its climax as Clara sneaks into the Bastion to rescue her Deputy from getting shot in the head. There have been a few delays to this book in recent months, but to be honest as long as the quality sticks at this high level I really don't mind waiting. Scott Godlewski's art is beautifully composed and drawn, and Ron Riley's slightly faded colours give the whole book a sort of sun-bleached aesthetic. It is, after all, a space western. Writer Jay Faerber does some great character work in this book: slowly leaking out backstory and motivations as he goes. It keeps things intriguing, since even ten issues in I'm not entirely clear where everybody's allegiances truly lie. (4/5)

As is the increasingly irritating fashion among comic books, Titan's line of Doctor Who comics is relaunching with new volumes and all-new first issues. They're not fooling anyone: this is the same Doctor and the same companion, having pretty much the same kind of adventures. This issue sees the Doctor and Alice captured by a dying civilization whose entire demise appears to be thanks to a previous Doctor's efforts. It's a fast-paced and pretty entertaining story, marred only by the last minute arrival of a character of whom I'm not overly fond (I shan't spoil who it is). (3/5)

DC announced that this book was ending prematurely with its seventh issue, although I've since read it may have gained a five-issue reprieve in order to reach a natural conclusion at issue #12. I really hope it does: this is a beautifully illustrated and intriguing science fiction adventure, and exactly the kind of fresh direction DC Comics needs to encourage in its books. In this issue, Kyle Rayner remains a captive of the Omega Men as the rocklike giant Broot attempts to break a sacred stone and secure a holy key. It's all rather weird stuff, pointing to a complex alien civilization without wasting any time in explaining it. That's all well and good, but I am reaching that point where I need a few less questions and a few more answers.It's entertaining stuff, but it's getting frustrating around the edges. (4/5)
Posted by Grant at 10:11 PM