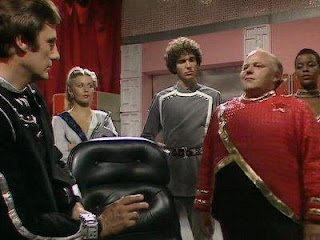 Keillor (Roy Kinnear), an old associate of Avon’s, contacts the Scorpio with a proposition: millions of credits in stolen gold, available for the taking. Before Avon (Paul Darrow) and his crew can attempt the heist, however, it becomes clear that Keillor has not been entirely forthcoming and someone else may be pulling the strings.

When Gareth Thomas quit Blake’s 7 at the end of the second season, it left the series in a bit of a crisis: the title character gone, and with him the narrative drive for a rebellion against the Federation. In its third year the series cantered through a series of science fiction adventures based around a half-destroyed Federation slowly rebuilding after an intergalactic war. In the fourth, a renewed focus was placed on fighting the Federation: Avon leading an attempt to disrupt the Federation’s drug pacification program and to assemble an army of scientists and political leaders to form a proper resistance. It was clear that an constantly unsuccessful rebellion was going to deliver diminishing returns for the series, and so with an eye towards a potential fifth year script editor Chris Boucher commissioned this script: a heist drama by Colin Davis, re-positioning Avon, Vila (Michael Keating) and the rest of their crew as self-interested criminals hunting for the ‘big score’.

Boucher has since confirmed in interviews that, had the BBC commissioned a fifth season, it would have been a lot like “Gold”: Kerr Avon, a criminal mastermind, and Vila Restall, a talented lock-picker and thief, heading up a group of like-minded thieves and mercenaries. Had it actually been produced, and using “Gold” as an example, I think this hypothetical season would have been rather fun to watch.

This is an archetypal heist: a team is put together, the scene of the crime is carefully cased, and a plan then enacted. Things go wrong, characters are forced to improvise, and people are double-crossed. As is the standard with Blake’s 7, events do not reach a particularly happy ending. Altogether it’s a bit formulaic, but it works thanks to its dialogue, its performances, and some uncharacteristically good visual effects.

I’m not sure precisely why, but most of the shots of the Scorpio and the pleasure cruiser Space Princess – from which Avon and Keillor plan to steal the gold – are a considerable cut above the usual low-budget model effects in the series to date. It helps that the Space Princess is also a genuinely impressive model with an eye-catching design. For whatever reason – possibly because this episode was acting as an unofficial fifth season pilot – a lot of time, money and effort has been put into the effects.

Roy Kinnear delivers a great guest performance as the over-confident, slightly sleazy Keillor. He’s played as a man who takes a little too long to realise that he’s out of his depth, playing one side off the other when both sides completely outclass him. It’s a performance with a lot of nervous energy, which works brilliantly. It also has an odd effect on Vila, who – removed from his usual role of ‘the cowardly one’ – suddenly comes across as smarter and more measured than he has all season. Sadly his role this episode is a minor one, with a lot more screen time given to Avon and Soolin (Glynis Barber) instead. I really like the professional rapport that’s developed between those two: it’s a shame it didn’t get another year to develop further.

The episode’s conclusion, and the identity of the mysterious backer behind the scenes, will not come as a surprise. At that point it hardly matters: it’s the preparation and the heist itself that forms the bulk of the episode, and it is superbly done. Another good episode, the fifth out of 10 so far, that brings the quality ratio up to 50 per cent.
Posted by Grant at 9:00 AM