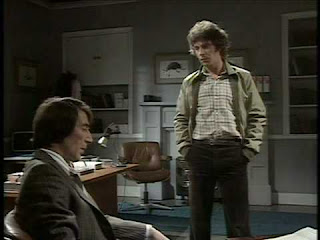 Tom (James Hazeldine) discovers two old friends have died in mysterious circumstances, and travels to an island off the coast of Scotland to investigate. He discovers their ecological research facility bought out by a foreign corporation, and a growing number of unexplained occurrences and violent incidents. What could drive a sane person to murder?

"St Anthony's Fire" is one of the two episodes of The Omega Factor (alongside "Powers of Darkness") whose content saw the programme cancelled at the end of its first and only season. The opening scene, in which a woman laughs hysterically, soaks herself in water and then stabs her husband to death with a kitchen knife, contravened the BBC's content guidelines for a prime-time drama. It's actually a very effective horror scene, and one that sets the episode up to be an unsettling and edgy psychological thriller. Sadly it's all downhill from there, thanks to some weak plotting, a lack of urgency and rather two-dimensional characters.

The episode falls very quickly into a range of hackneyed routines. Tom arrives on an island packed with suspicious locals and ingratiating corporate stooges with things to hide. There's a nervous, alcoholic local doctor who wants to get something off his chest, but every time he goes to say something there's another stooge warning the doctor away. The whole scheme is governed by a mysterious employer, but he remains elusive and unavailable for the bulk of the episode.

Things get even worse when an irritated Martindale (John Carlyle) sends Anne (Louise Jameson) to the island to bring Tom home. There's immediate jealousy between Anne and evil company agent Sarah Ashley (Jean Gilpin) over Tom. Sarah seems a one-note character, basically seducing her way around the world on behalf of an evil corporation. For Anne the bitchy confrontations seem deeply out of character, and cheapen her immensely. It's a dreadful misstep.

The episode ends rather abruptly, with some deaths but no real explanation or resolution. The mysterious "Omega" organisation gets referenced again, and Martindale certainly seems to be involved with them, but apart from that there's not too much movement in terms of the overall story arc.

It's a shame: two bad episodes in a row. After seven episodes, four of them have been good. The quality ratio drops to 57 per cent.
Posted by Grant at 7:00 AM