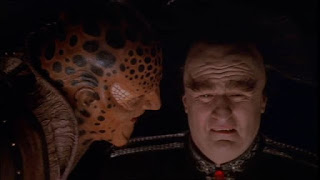 Londo Mollari (Peter Jurasik) suffers a sudden heart attack. While Dr Franklin (Richard Biggs) works around the clock to keep him alive, Londo finds himself in a surreal dream where he is forced to face his greatest fear - and to decide whether to live or die.

One thing to which J. Michael Straczynski has constantly returned throughout Babylon 5 is the dream sequence. He can't get enough of them, with characters regularly experiencing visions, hallucinations, dreams and other strange, deliberately symbolic and weird scenes. I think here he goes for the most ambitious dream of all, putting almost the entirety of the episode inside Londo's head.

I am utterly sick of it. This lengthy dream sequence has precisely two positive things going for it, which is - rather predictably - Peter Jurasik and Andreas Katsulas as Londo and G'Kar. Everything beyond their performances is a tedious barrage of unbridled pomposity - all sound and fury with no real point, message or originality. If one was to create a parody of a lengthy Hollywood dream sequence, they could conceivably create this episode. It's an eye-rolling exercise in testing its audience's patience.

There are only so many prolonged conversations with dream representations of other characters that a viewer can take. The climax of the Shadow War descended into this kind of silliness. It seems to have been a general trend for SF television at the time, since well before Straczynski started playing with the format Star Trek: Deep Space Nine had made it the manner in which the mysterious Wormhole Aliens communicated with the series characters. To be honest the technique has never worked for me as a viewer, and rarely fails to irritate.

The core of the episode is, of course, Londo finally apologising to G'Kar for everything his actions put both G'Kar and the Narn through. It's a lovely moment when the waking Londo whispers it to G'Kar from across the operating theatre, but it's also a shame that a proper conversation between the two men couldn't have occurred when both were present and awake. There is some genuinely insightful dialogue here - particularly the dream G'Kar's insistence that standing by and not speaking against injustice is almost as bad as the injustice itself - but in every case it's dialogue that would have been better served by the actual characters having it out in a room.

A brief subplot sees Lennier (Bill Mumy) resign as Delenn's aide to become a ranger on Minbar. He's leaving because he loves Delenn (Mira Furlan) and she loves Sheridan (Bruce Boxleitner). It's a pretty appalling development for the character, to be honest, that weakens what had previously been a firmly established sense of duty and resolve. The love triangle screams for Sheridan and Lennier to sit down and talk it through, but for whatever reason Straczynski chooses to let a heart-broken Lennier leave without a proper heartfelt exchange with either Sheridan or Delenn. He does get a beautiful farewell with Vir (Stephen Furst), which is probably the episode's best scene.

This is clearly a "bottle" show, using standing sets and the main cast to tell a story as inexpensively as possible. There are good ways and bad ways to make these kinds of episodes; sadly "The Very Long Night of Londo Mollari" does it the bad way. Two episodes into Season 5, and I'm still waiting for one that's good.
Posted by Grant at 10:24 PM