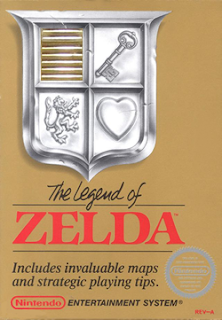 Pretty much the most widely acclaimed and feted videogame designer of all time is Shigeru Miyamoto. Back in the mid-1980s, when Nintendo were developing new titles for their fledgling Famicom system, Miyamoto concurrently designed two key games that would go on to shape the company's fortunes for decades into the future. The first of these games was Super Mario Bros. The second was The Legend of Zelda.

The games were deliberately styled to contrast one another. Super Mario Bros was a linear experience, with the player controlling Mario as he ran and jumped from left to right through a series of 32 levels. The Legend of Zelda offered an expansive series of screens - viewed top-down - and allowed the player to control the forest boy Link as he explored the fantasy world of Hyrule. In a time when videogames still focused on the high score as a measure of player achievement, Zelda abandoned scores entirely: completing the adventure was the only measure of success.

Link explores the world, and when the occasion arises he also explores a series of puzzle and monster-filled dungeons. It was this seemingly open exploration that made the game so much fun. While the game is not a role-playing game in the traditional scene, it successfully foreshadowed many of the elements of that genre among Japanese console games. There are nine dungeons in all: completing the first eighth gives the player the ability to enter the ninth and to rescue the titular Princess Zelda. The game's narrative was long enough that when released in the USA and Europe it became the first cartridge to contain its own battery, so games could be saved and returned to at a later date.

Of course by comparison to subsequent games in the series The Legend of Zelda seems a little primitive: its early NES graphics (it was ported to the console in 1987) were rapidly overtaken by other games, yet the gameplay is so strong that it remains enormously playable. So many of the subsequent titles are merely fresh iterations of the same basic story and gameplay. It was a massive success when released internationally, and became the first NES title to sell more than one million copies. A sequel, Zelda II: The Adventure of Link, was released for the NES in 1988.

It is actually quite difficult to write about The Legend of Zelda, because so much of its strength as a game stems simply from its quality. The graphics are clear and attractive. The gameplay is varied, but also clear and easy to understand. The dungeons gradually increase in quality in a pleasing and challenging fashion. It is, quite simply, a masterful piece of work: memorable, immensely playable and wonderfully entertaining.
Posted by Grant at 3:03 PM