Babylon 5: "The Paragon of Animals" 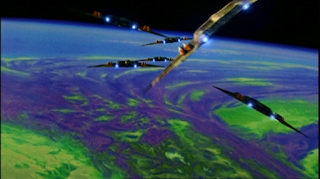 Sheridan (Bruce Boxleitner) and Delenn (Mira Furlan) struggle to unite the Interstellar Alliance, with many of the worlds refusing to sign its declaration of principles. In his new role as Head of Covert Operations Garibaldi (Jerry Doyle) develops a plan to use the station’s colony of telepaths to spy for him. A remote civilization begs for help when they are targeted by raiders.

Three episodes into Season 5 and the two main faults of this widely maligned final year have become fairly clear. The first problem is money: in transferring from PTEN to TNT, the series has visibly undergone a budget cut. The casts in each episode seem a bit smaller, while the sets and visual effects seem less ambitious. Most critically the cast aren’t getting the shooting schedule they used to have. Scenes feel rushed and clumsily blocked (where the actors move to and from during the scene). Performances feel poorly considered and weak. It all has the vibe of opening night at a community theatre production: there’s talent in there, but it’s all nervous and confused and just a bit tiresome to watch.

The second obvious fault is that the tone of Season 5 is all wrong. It’s as if J. Michael Straczynski was so convinced he was finishing the series with Season 4 that he simply doesn’t know what to do now that he has another 21 episodes to write (the 22nd, “Sleeping in Light”, was actually shot as part of Season 4). Sheridan feels like a cardboard cut-out. Delenn weirdly praises the virtues of bullying and terrifying less powerful civilizations to make them back down from an attack. Garibaldi wants to start using rogue telepaths to illegally scan people’s minds. The weird change in characterisation continues to hit G’Kar (Andreas Katsulas) and Londo (Peter Jurasik) the hardest. They used to be the dramatic spine of the series. As recently as the last episode Straczynski was back using them in that fashion. Here we return to the comedy double-act of “No Compromises”, and it feels awful to watch.

All that said, “The Paragon of Animals” isn’t entirely without merit. A great subplot sees Lyta (Patricia Tallman) scanning the mind of a dying Ranger, and remains psychically linked to him as he dies. While the glowing light and heavenly doorway they both see is fairly ridiculous, Lyta’s explanation of the experience to Garibaldi afterwards is much more nuanced. Lyta subsequently confides in Byron, the leader of the rogue telepath community on the station. This bit of character development for her is great. Byron’s dialogue is not, particularly his lengthy quote from Shakespeare’s Hamlet. Robin Atkin Downes’ performance is weirdly 1990s: that strange sort of flat theatrical style that seemed to be all over the place in cable genre dramas. I suspect it was a little more tolerable back in 1998, before it dated so badly.

Also strong is the revelation that one of the key members of the Interstellar Alliance are secretly profiting from raiders along their borders. It’s almost great piece of political drama until it all descends into a bit of a pantomime by the end.

That’s the problem with “The Paragon of Animals”, really. It has a lot of ideas, and on the whole they’re fairly engaging ones. It almost feels like a return to the sort of show I was watching during Season 4: many faults, but ambitious and broadly entertaining. The execution remains way off. I’m giving it the thumbs-up, but in all honesty it’s a closely run thing. It leaves us with one good episode out of three so far, and a quality ratio for Season 5 of 33 per cent.
Posted by Grant at 11:39 AM