Doctor Who: "The Girl Who Died" 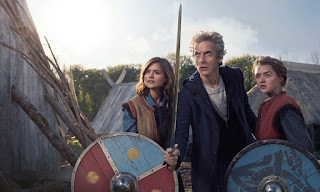 The Doctor (Peter Capaldi) and Clara (Jenna Coleman) must help to defend a village of vikings from the Mire - one of the most dangerous warrior races in the galaxy. While trying to develop a defence plan, the Doctor becomes fixated on Ashildr (Maisie Williams) - a young woman with a powerful imagination.

Last year there was an episode of Doctor Who named "Robots of Sherwood". It took popular medieval myth - the Robin Hood legend - and transformed it into a whimsical mixture of science fiction and silly comedy. I absolutely hated it: it grated to watch and was a chore to sit through, and I still stand pretty firmly in my opinion that while it wasn't the worst episode of Doctor Who ever made it would easily make the bottom five. It was dreadful television.

This year we now get "The Girl Who Died", by series producer Steven Moffat and Jamie Mathieson ("Flatline", "Mummy on the Orient Express"). It's taken popular medieval myth - the vikings - and transformed it into another whimsical mixture. There are lots of attempts at humour, or funny lines, or silly pratfalls. It's thrown in science fiction: an armoured race of violent soldiers known as the Mire. On paper it all seems like it should another disaster in the making, and yet "The Girl Who Died" works where "Robots of Sherwood" did not. It's interesting to work out why.

I don't want to give the wrong impression: out of the five episodes of Season 9 so far broadcast, this is easily the weakest. Large swathes of the episode seem formulaic and a little ordinary. The episode's climactic battle for one seems abrupt and weirdly unenthused. Like "Robots of Sherwood" it makes no attempt to be historically accurate; that much is clear from the first horned helmet. The Mire are a pretty ordinary and throwaway sort of a villain, particularly in the light of other additions to the catalogue this season like the Fisher King and Colony Sarff.

There's something deeper running through the episode though. There's a serious thread weaved between the silly comedy and the disappointing climax. It's there in conversations between the Doctor and Clara. He's clearly becoming troubled by her, either because she's becoming too much like him or because he knows something about her future that he's not willing to divulge. I'm beginning to wonder if he already knows how she's going to die, and that it's not going to be as an old woman in her bad. That's emphasised by the knowledge that Jenna Coleman is indeed moving on at the end of the season: we know she's gone by the end of episode 12, but it's beginning to feel like the Doctor knows that as well.

Even scenes that should be tediously silly, such as the return of the Doctor's ability to 'speak baby'. In the hands of Gareth Roberts (back in "Closing Time") it was a silly excuse for dumb jokes. Here it becomes oddly poetic, and occasionally rather profound.

Maisie Williams is great as Ashildr. Were it not for her ongoing commitment to Game of Thrones (where she plays Arya Stark) she'd be perfect companion material. The episode's final scenes certainly leave her in an interesting place, and I'm keen to see how her character develops in the next episode. There is an awkward transition towards the end, from the Doctor mourning her death to suddenly deciding to save her life, but once the episode gets over the hump its final minutes are fantastic. The prophecy of the Doctor creating a hybrid was referenced by Davros back in "The Witch's Familiar", and it now seems he's made one - and the audience seems to have stumbled onto this season's overall arc.

Overall this episode is entertaining enough, with occasional moments of brilliance. It continues the winning streak enjoyed by the season so far: five episodes in, all of them good to one extent or another, and a quality ratio that's sticking at 100 per cent.
Posted by Grant at 5:00 PM